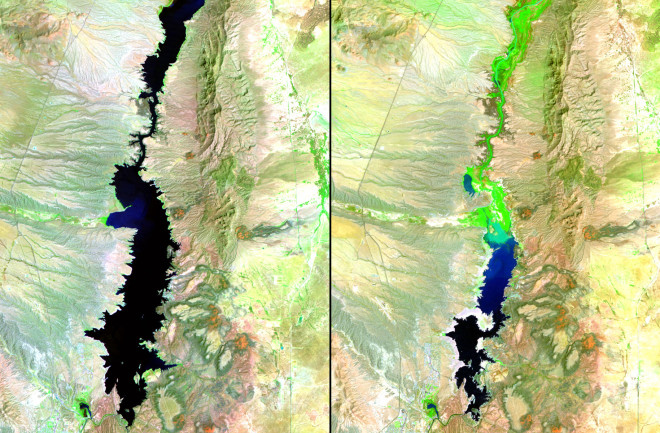 Over the past 20 years, the Elephant Butte Reservoir in New Mexico has shrunk drastically, as seen in this pair of images captured by the Thematic Mapper sensor aboard the Landsat 5 satellite. August, 1991 is on the left, and August, 2011 is on the right. (Source: USGS Landsat Missions Gallery.) Tomorrow, the weekly report of the U.S. Drought Monitor will be released, and I can't imagine that it is going to show much improvement in profoundly parched New Mexico. As of last week, almost the entire state was in drought. And in 80 percent of the Land of Enchantment, drought was categorized as extreme. This continues a dry spell that has lasted more than a decade. Nine of the 13 years since 2000 have seen drier than average conditions (compared to a 1981-2010 baseline). And for the headwaters of the Rio Grande River, the main waterway of the state, the situation has been even worse. The toll this has taken is dramatically evident in the remote sensing images above. The pictures show the change in water storage in the Elephant Butte Reservoir on the Rio Grande between August, 1991 (left) and August 27, 2011 (right). As of May 7, the reservoir — built in 1916, and at the time the largest irrigation reservoir in the world — was at just 10 percent of capacity. Out here in the West, we have an expression that pretty sums up the current state of affairs: "Whiskey is for drinking; water is for fighting over." (The quote is attributed to Mark Twain, but it's origin is actually unclear). With New Mexico and Texas fighting it out in the U.S. Supreme Court over allocations of the Rio Grande's dwindling water, that's exactly what's happening now. Texas accuses New Mexico farmers of draining Rio Grande water intended for the Lone Star State by tapping ground water supplies. This water, Texas claims, would ordinarily help supply the river. Whether they're right or not, the bigger picture is pretty stark. According to the National Climatic Data Center, 2011 and 2012 together comprised the driest and warmest two-year period in New Mexico since modern record-keeping began in 1895:

Graphic: National Climatic Data Center As in much of the West, drought has contributed to wildfire activity in New Mexico. Here is a pair of striking before and after images showing one recent wildfire in New Mexico:

Before and after: Las Conchas Fire, New Mexico. (Main source: USGS Landsat Missions Gallery, U.S. Department of the Interior / U.S. Geological Survey.) The images are centered on an ancient, 14-mile wide volcanic caldera in the northern New Mexico's Jemez Mountains. (Click for a bigger version.) The image on the left was taken on June 24, 2011. Two days later, a downed power line ignited a wildfire dubbed the Las Conchas fire, and within 14 hours it had burned more than 44,000 acres — that's a rate of almost an acre a second. (My blogging colleague here at Discover, George Johnson, posted a terrific piece about the fire just a few days ago. Check it out.) The image on the right was taken on July 2, 2011. The reddish tones show the burn scar. And if you look closely, you can see bright pink indicating active fires. In total, the wildfire went on to torch over 156,000 acres, making it the biggest one in state history up until that point. (It was surpassed in 2012 by the Whitewater-Baldy Fire Complex.) The Los Conchas fire destroyed sites considered sacred by American Indian tribes, threatened the Los Alamos National Nuclear Laboratory, and heavily impacted Bandelier National Monument. From the National Park Service:

All the major watersheds within Bandelier were heavily impacted by the fire including Frijoles Canyon, where the visitor center and main visited archeological sites are located. Over 75% of Frijoles Canyon lay within the fire's footprint, much of it burned with high severity.

Another fire season is looming. It could be bad. Very bad.