Leafsnap: The Intersection of Art, Science and Education 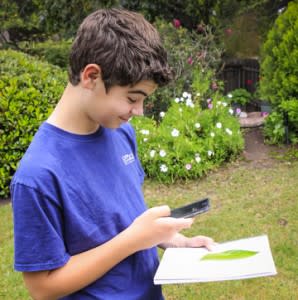 It's a warm spring day in New York City. Kathy Elwood, a sixth grade teacher, leads a group of kids down an East Harlem street. Snapping pictures of trees, they identify different species and stop to discuss them. Later, when they return the same way, the kids now notice the trees and begin to call them by name. “I could point to one and they would yell out the name, so proud that they knew they could recognize something," says Elwood. "It was a great moment in sixth grade." The class was using a free app called Leafsnap, which was produced thanks to a $2.5 million National Science Foundation (NSF) grant, and developed by Columbia University, the University of Maryland, and the Smithsonian Institution. The class project is part of another NSF project, one that seeks to transform the way urban middle school students interact with the diversity of trees just outside their front door. Creating Leafsnap While it started out as a tool for scientists to speed up the process for species discovery and description, Leafsnap has since evolved to let the public participate in research as well. In its initial iteration, Leafsnap was “something that would allow a researcher to quickly identify a plant in the field in the Amazon, and to figure out what things we have information about and those we don’t,” said Dr. John Kress, a team leader and the Curator of Botany at the Smithsonian Institution (Professor Peter Belhumeur and Professor David Jacobs, of the Computer Science departments of Columbia University and the University of Maryland, and a not-for-profit nature photography group Finding Species, were also involved). “We started it out as a scientific tool, but halfway through the project smartphones started to appear, and we decided to shift gears and make it more of a citizen science tool.” The app uses pattern recognition software to make tree identification easy. Winner of the 2011 Edward O. Wilson Biodiversity Technology Pioneer Award, Leafsnap was recognized as one of the ten best apps of 2011. Using Leafsnap to understand climate change With a database of two million ‘snaps’ already accumulated, Kress says that in five to ten years they hope to test the assumption of a northward shift of trees due to climate change. “So there is a big climate change aspect to Leafsnap,” he emphasizes. A Vermont tourism organization has also contacted the team to ask if they would be able to further develop the Leafsnap app to track fall colors. There is something to be said for a tree guidebook. Call me ‘old school,’ but the book has a certain feel to it. The pages get dog-eared, you can press a leaf or a blossom between its covers, and you might even scribble notes in the margin—much the same as for a favorite bird book or even a nature journal. But pause to consider how many guides you would need to cover the Amazon, UK, Canada and the US. And there is one other thing to consider—you don't have to key into a species with Leafsnap.

In Discover Magazine's June edition, the article "The Color of Climate Change" follows an ecologist as he observes changes in the color of tree leaves to determine the effects of climate change on forest ecosystems. You can do this too with Leafsnap, a citizen science project!

That was something that motivated Dr. Yael Wyner, an assistant professor at the City College of New York and the principal investigator for the NSF project that introduced the sixth grade class to the trees on their street. The study seeks to place urban tree diversity into an evolutionary context, using Leafsnap. “What’s great about the app is it allows you to identify trees without using a key system.” With tree guidebooks you have to make a series of selections that key you into the genera and finally the species, for example: is this a toothed simple leaf or an untoothed simple leaf? If it’s a toothed simple leaf, you might then narrow it down to an elm, which has four species to choose from, or an alder, which has six species to consider. And it doesn’t get any simpler from there. “When we saw these smartphones being used, we noticed that people were being led around by them," says Kress. "So we said, let’s make an app that actually makes people look at the environment.” The app now seems to be hugely successful, with hundreds of thousands of users having fun with it, and teachers like Wyner developing curricula based on its functions. Using the app

To use the app you have to walk up to a tree, pick a leaf, and take a photo of it against a white background with your iPhone. The app then identifies the leaf before filing the record. Consider how long it would take, or how much it might cost to pay someone to collect these records. Eric Kessler is a high school biology teacher in Overland Park, Kansas who has reviewed the app. He says, “Technology like the LeafSnap app motivates student interest, and is fostering new dialog between practicing scientists and K-12 education that should be commended.” That sounds like a new definition for citizen science. Identification is the first step to recognition, and recognition is the first step to caring. “One of the goals of our project for example, is to teach students that while all oak trees have acorns, all oak trees also come from a common ancestor that had acorns," says Wyner. This ties into biodiversity, which arguably is difficult to understand. “I think this will make noticing, identifying, and grouping species far more interesting." With any citizen science project that relies on a smartphone you find convergence of two fields—science and technology. Kress and colleagues hope to publish a paper to show what Leafsnap can do in terms of technology in the next three or four months, but every ‘snap’ that is taken and stored will feed into a long-term study. Whether captured as part of Wyner’s study, for a classroom lesson, to contribute toward a non-profit project, or if only when you’re out for a hike with your iPhone, each of these images will ultimately inform climate change research. Extras: