Latest El Niño Forecast: Expect It to Last Into Spring and Possibly Peak as One of the Strongest on Record 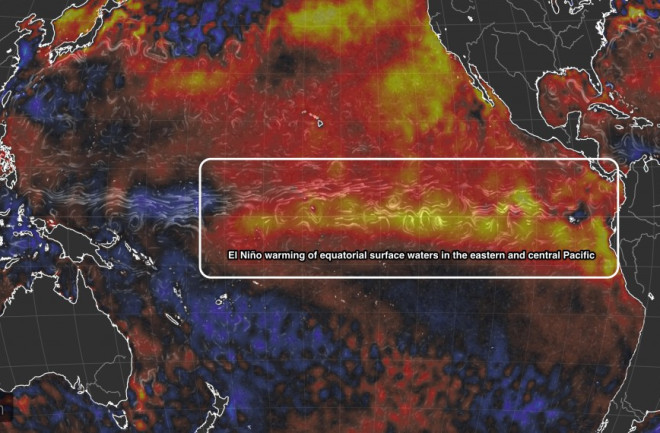 Warmer than normal sea surface temperatures, as indicated above by red,orange and yellow colors, dominate the equatorial waters of the central and eastern Pacific Ocean — a hallmark of El Niño. (This visualization is a forecast for Aug. 13, 2015, generated by supercomputers. Source: Earth.Nullschool.net) A new El Niño forecast is out, and while it may not be terribly surprising, it's still worth noting: El Niño will almost certainly be hanging around for at least the next seven months, and probably more. But not only that. It continues to look very likely that this El Niño will peak in winter as one of the strongest — if not the strongest — on record. According to the latest forecast, published today by NOAA's Climate Prediction Center, there is a 90 percent of El Niño persisting through the Northern Hemisphere winter of 2015-2016, and about an 85 percent chance that it will last into early spring.

SEE ALSO: As El Niño Gets Even Stronger, He's Not Really Looking Like a Child Any Longer — More like the Monster of 1997/1998

If conditions stay on their current track, it could turn into what Bill Patzert, a climatologist with NASA’s Jet Propulsion Laboratory, has called "the Godzilla El Niño." But a big caveat is in order here: This is climate and weather we're talking about, so there are no guarantees. Even so, the animation below shows there's a whole lot of momentum behind this muscular El Niño:

Source: Climate Prediction Center Except for a dip in January, the subsurface waters of that region have been abnormally warm since at least September of last year. And here's what the top 300 meters of the Pacific of the equatorial Pacific look like in cross section right now:

A cross-section showing how water temperatures vary from average in the equatorial Pacific Ocean down to 300 meters. (Source: Climate Prediction Center) There are two features of interest here. First, there's that obvious blob of very warm water stretching across much of the Pacific from about the dateline (180 degrees) to 80 degrees West, off the coast of South America. You're looking at what scientists called a "downwelling Kelvin wave," and it's another hallmark of El Niño. Also note that smaller blob of blue to the west (left). That's cooler than average water, near New Guinea and Indonesia in the western Pacific. If you go back to the image at the top of this post you'll note that the cool waters at depth are reflected at the surface. The western Pacific usually features relatively warm water. The trade winds, which normally blow from east to west, help bottle the warm water up there. But those winds have weakened and even reversed direction at times since January, allowing the warm water to slosh east across the Pacific toward South America. I've mentioned this phenomenon before at ImaGeo, but here's something I haven't focused on very much:

(Source: Climate Prediction Center) This graphic shows something called outgoing longwave radiation, as detected at the top of the atmosphere by satellites. That sounds complicated, but it's actually pretty straightforward. Sunlight absorbed at Earth's surface causes the land and water to heat up. A warm surface radiates energy back out into space — at longer wavelengths than the incoming sunlight itself. That's outgoing longwave radiation, or OLR. When there are more clouds, less of that energy can escape than when there are fewer clouds. With all of that in mind, take a closer look at the graphic above. It shows the current pattern of outgoing longwave radiation in the equatorial Pacific. Note that blue swath extending along the equator. The blue means less longwave radiation is emanating from this region — because it is experiencing more cloudiness than normal. This also means more storminess. (I know, the color scheme might seem a bit confusing. If so, remember that blue = less outgoing longwave radiation, because there are more clouds that are blocking it.) Meanwhile, over by New Guinea and Indonesia (and extending up to the Philippines), those warm colors indicate more outgoing radiation. That's because of reduced cloudiness here to block the outgoing energy in this region. And, of course, less cloudiness means less storminess. This pattern makes perfect sense. Warm waters at the surface of the ocean provide fuel for storms. So the warm water in the central and eastern Pacific is powering an upswing in cloudiness and storms there, whereas farther west, the opposite is true. This too is a hallmark of El Niño. So, that's it for geekery. (At least in this post!) Why should we care about all of this? In one graphic, here's why:

This is what we can expect in North America come winter, thanks to El Niño. The warming of central and equatorial Pacific waters typically sets off a cascade of effects, including a shift in the Pacific jet stream that results in a wetter weather pattern across the southern tier of United States. Now, take a close look at California. That green swath of wetness covers the southern part of the state, but not farther north. That's what happens during an average El Niño. If the current event does become a super El Niño, as many forecasters expect, that abnormally wet weather could extend much farther north in California. For the sake of California drought relief, let's hope so! But let's also hope that it comes without the associated mayhem of torrential rain bringing floods and mudslides. That's what occurred during the super El Niño of the winter of 1997/1998.