By NASA's reckoning, May was the warmest such month on record. But Earth's particularly high fever may be breaking — at least for now. 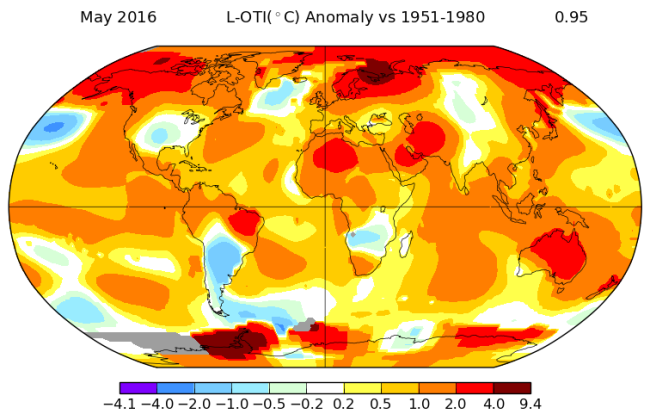 This map shows how temperatures around the world in May, 2016 departed from the long-term average. (Source: NASA GISS) Another month gone, and another record bites the dust. According to an analysis by NASA's Goddard Institute for Space Studies, last month was the warmest May in a record extending back to 1880. By the reckoning of NASA GISS, this marks the eighth straight month of record high global temperatures. And it keeps 2016 on track to enter the record books as warmest year on record. Gavin Schmidt, GISS director, pegs the odds of that happening at 99 percent: https://twitter.com/ClimateOfGavin/status/742668462699499520 Even if 2016 does break the record for warmest year, global temperatures could level off in 2017. More about that in a minute. But first...

The Arctic: Earth's overheated canary in the coal mine

As the map of global temperature anomalies at the top of this post shows, unusual warmth during May was particularly evident in the Arctic — as it has been for many months. Here sea ice is on track to shrink to its lowest extent on record by September of this year.

SEE ALSO: Arctic sea ice continues its downward spiral, reaching a record low extent for the month of May

Continuing unusual warmth in the Arctic also triggered a dramatic surface melting spike in Greenland this month. Here, too, records may well fall as the summer progresses.

Globally, May was .93 degrees Celsius, or 1.67 degrees F, warmer than the long-term average for the month. That temperature anomaly beat the previous record for May set back in 2014. But each of the seven months prior to May were even more unusually warm — including last February, which was the most anomalously warm month of all 1,637 in NASA's record. It's quite possible that Earth's particularly high fever has finally broken — at least for now. That's because El Niño, which along with human-caused warming raises Earth's global average temperature, has finally faded.

Source: NASA GISS I created the animation above to show what that transition entails. It compares global temperature anomalies in January of this year with May. Look in particular at what has happened to the surface waters along the equator in the central and eastern Pacific. The bright red spear indicative of unusual warmth in January's map has faded considerably to a less intense orange. That cooling is indicative of El Niño's passing — and, in all likelihood, the emergence soon of La Niña, its opposite.

La Niña tends to exert a cooling influence on global average temperatures. But whatever influence La Niña might have, it will be a relative blip in the underlying, long-term global warming trend, caused by humankind's relentless emissions of carbon dioxide and other greenhouse gases. The National Oceanic and Atmospheric Administration will be out soon with its own verdict on May. NOAA does its analysis independently. Although the agency uses the same data as NASA, it completes its assessment with a different method, so the agency could have a slightly different result for May.