Last Year May Have Been the Warmest on Record, But Clues From a Coral Atoll Suggest We Ain't Seen Nothin' Yet 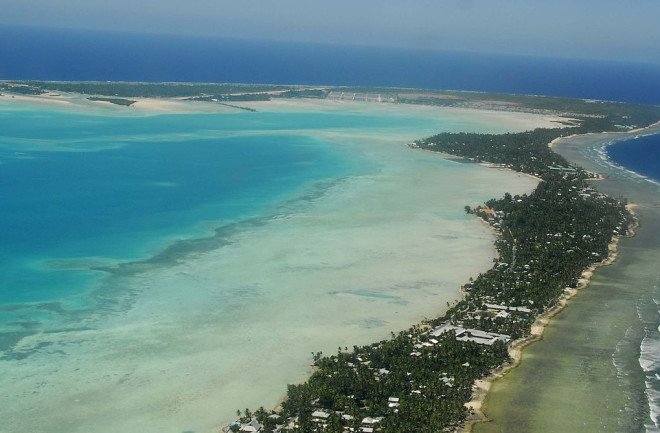 Source: Wikimedia Commons It really is official now: 2014 was the warmest year in a record stretching back to 1880. The news came in an unusual joint press conference by both NASA and NOAA. This follows the release of data by the Japan Meteorological Agency earlier this month showing essentially the same thing. Is this the end of a slowdown in the rise of global average temperatures at the surface? It is too soon to tell. But recent research by Diane Thompson of the National Center for Atmospheric Research, published in the journal Nature Geoscience, suggests that no matter what happens in the short term, global warming is probably primed to eventually take off with a vengeance. Her conclusion emerges from some fascinating scientific detective work involving a single piece of coral plucked from the waters of Tarawa atoll in the tropical Pacific. We start that detective story with the global warming slowdown: "Despite the fact that we are continuing to pump greenhouse gases into the atmosphere, warming has slowed," Thompson says. "A lot of work has gone in to understanding why and where the ‘missing heat’ is going." Recent research has shown that the subsurface waters of the Pacific Ocean have been absorbing a lot of the heat that has been building up in Earth's climate system thanks to humankind's emissions of greenhouse gases. But how has this been happening, for how long, and when might it stop? A study the journal Nature Climate Change found that unusually strong trade winds along the equator for the past few decades have been pushing heat down into the Pacific ocean while also bringing cooler water to the surface. In other words, the Pacific Ocean has been acting as a giant air conditioner for the planet, temporarily offsetting warming from increasing greenhouse gases. The work by Thompson and her colleagues supports this view and shows that the same process has occurred in the past. It also shows that the opposite has occurred: When the trade winds have been weak in the past, warming has accelerated. One important take-away is that this has been a see-sawing pattern. So the current bout of strong trade winds inevitably will end, thereby weakening the air conditioner and allowing heat locked away in the Pacific Ocean for the past two decades to pour back out into the atmosphere. This would bring an end to the current warming slowdown and usher in a period of record high temperatures. As seen from the air, Tarawa is a typical tropical atoll — a small chain of coral-fringed, palm-covered islands sheltering a shallow, turquoise lagoon. Along with the other low-lying atolls and islands that make up the Republic of Kiribati, Tarawa is on the front lines of climate change, thanks to a rise in sea level that has already encroached on arable land and contaminated drinking water supplies. So it is perhaps fitting that clues about that missing heat have come from there. "Like trees, corals grow in annual bands, Thompson says. "And just as scientists use tree rings to chart variations in rainfall over time, changes in ocean chemistry are recorded in the annual bands of corals."

Tarawa atoll is shaped like backward C, with the lagoon facing toward the west. You can see it in this satellite image:

Tarawa Atoll, as seen by a NASA satellite. The lagoon is protected by the small islands that surround it on all sides — except the western side, which is open to the sea. (Source: NASA) The trade winds blow from the opposite direction, the east. In the image above, that would be from the upper right corner. "This means the lagoon is typically calm, shielded from the winds. But every once in awhile there is a burst of wind from the west," Thompson says. From that direction, there is no protection from the islands. So when winds blow from the west, the shallow lagoon gets unusually turbulent. Thompson picks up the story:

When this happens, sediments at the bottom of the lagoon are stirred up. Trace metals in those sediments, particularly the element manganese, are kicked up too and released into the sea water. Coral that grows nearby doesn’t know any better. It's just growing and incorporates manganese into its skeleton in place of calcium.

So those occasional wind bursts from the west leave corals relatively enriched in manganese. And by going through a coral's growth rings one by one, Thompson was able to reconstruct a year-by-year record of how the winds were blowing in that part of the tropical Pacific. "It turns out that the bursts of westerly winds that the coral is recording are related to the trade winds, which blow from the opposite direction," Thompson says. When the trade winds are strong, they are a hindrance to wind bursts from the west, thereby suppressing them. When the trade winds are weak, those westerly wind bursts are more common. So by charting the spikes of manganese in her coral sample, Thompson saw a see-sawing pattern of trade wind strength in the Pacific stretching from 1894, when the coral began growing, to 1982, when it was removed from the water. (It has been stored safely ever since.) That record shows that trade winds were weak from 1910 to 1940. This was a period when the average temperature of the Earth was rising — and at a rate that was faster than can be explained by the greenhouse gases being emitted into the atmosphere at the time. In other words, during this period weaker trade winds were driving less heat into the subsurface waters of the Pacific. Between 1940 and 1970, however, Thompson's record shows that the trade winds were stronger. This coincides with a relatively cool period. And that makes perfect sense: Those stronger winds were pushing more heat from the atmosphere into the deep. For now, the trade winds remain strong. "Those winds have been giving us a reprieve — but only temporary," Thompson says. "The winds will inevitably weaken, and when that happens, our study suggests warming will accelerate." Was the record warmth in 2014 a sign that this is already starting to occur? Probably not. It turns out that a cycle of strong trade winds lasts about 30 years. And this current cycle started in 2000, so we're about 15 years in. "We cannot cannot anticipate the exact timing of when the cycle will change," Thompson says. "But we can say that it will likely be in next one to one and half decades."

Click here for an interview I did with Diane Thompson on How on Earth, KGNU radio's science show.