Landscapes of the Anthropocene, Across the Globe How do people respond to dramatic environmental changes in their own backyards? The photographers featured in the upcoming Blue Earth Book have traveled far and wide to answer this question. The documentary projects range from mining communities in the American south, to the Mixteca region of Mexico, from the Nigerian delta to the Chernobyl community in the Ukraine.

Here, at an illicit refinery in the Niger Delta, a worker sits on a wooden boat filled with crude oil. The surrounding community relies on this river water for bathing, drinking, and fishing. 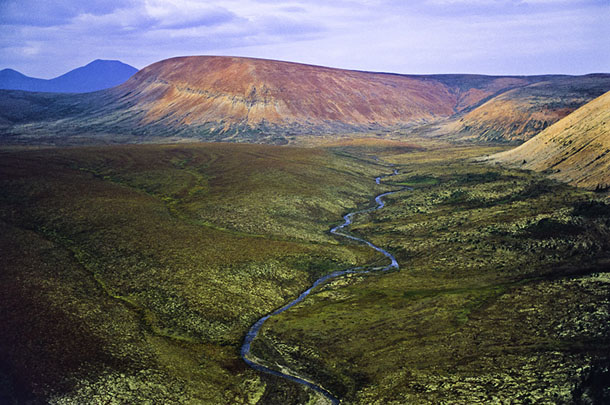 The non-profit Blue Earth Alliance has launched a Kickstarter campaign for the photography book, which will emphasize the intersection of the social and the ecological. BEA director Bart Cannon says, "We see this new series as a great tool for educating the public about critical, under-reported issues while at the same time helping to support our photographers working in the field."

Some, like this photo taken at the Mackenzie Valley, highlight environmental destruction yet to occur. A proposed 1,196 kilometer natural gas pipeline would run through the valley to connect offshore gas fields with North American markets. Says photographer Garth Lenz, "This region will be directly impacted by the proposed Mackenzie Valley National Gas Pipeline. This pipeline would bring gas from the Beaufort Sea. The primary destination for the natural gas will be to fuel the energy needs of the Alberta Oil Sands mega-project." The process of making liquid fuel from the oil sands requires steam injection and and refining, all of which requires energy. 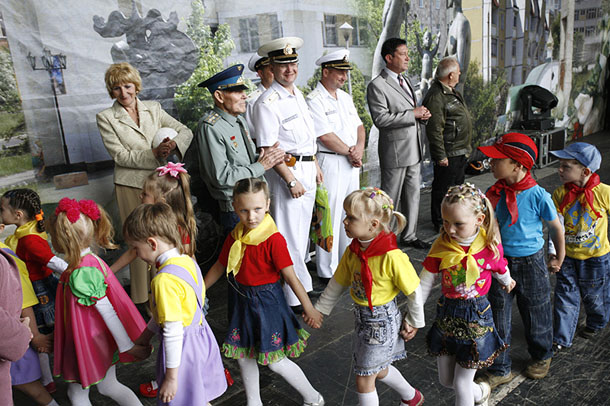 Other images come with decades of history. Photographer Michael Forster Rothbart's series "After Chernobyl" is one compelling example. Forster Rothbart has traced the legacy of the nuclear explosion at Chernobyl in 1986, living for a time in a village just outside of the Chernobyl Exclusion Zone. This photo was taken at Slavutych, about 50 miles from the Chernoblyl site.

"In the popular imagination, the Chernobyl region is a wasteland—forsaken, hazardous and inaccessible. And yet, a generation later, life continues in these radiation-affected areas. Six million people still reside here... How much radiation is safe? No one knows. Comprehensive medical research has never been done to determine the health effects of long-term radiation exposure. In the absence of facts, people believe rumors, propaganda, and their own first-hand experiences. Why do people stay? A lack of alternatives. A sense of duty. Deep ties to the land. Decent jobs. Because this is home." 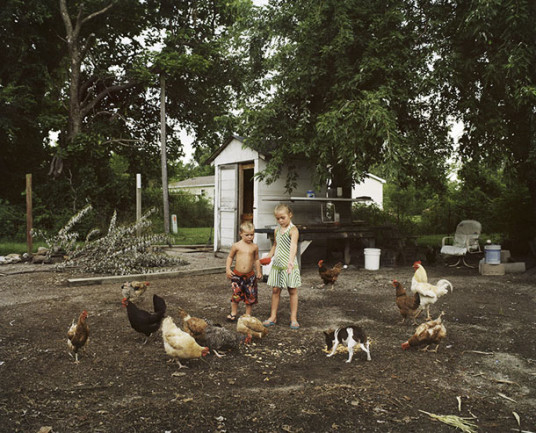 This photo is from "Treece," a series documenting the residents and landscape of a fading American town. A former mining community, Treece, Kansas, is now economically and environmentally devastated. The residents are in the midst of a government-funded relocation program, so they can escape living on unstable land that is contaminated with lead. 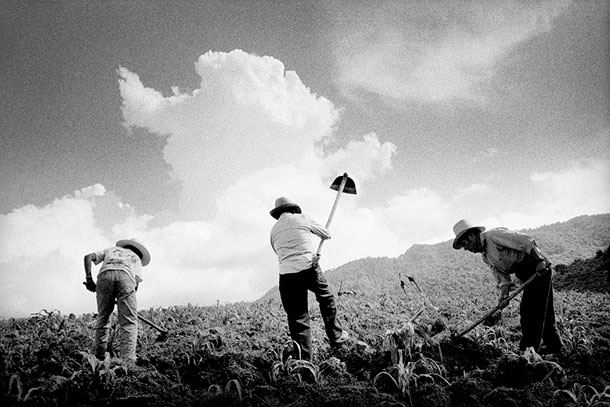 Farmers till a newly sprouted corn field in Oaxaca, Mexico. The indigenous Mixteca people in Oaxaca and neighboring states are suffering from the region's severe environmental degradation due to soil erosion. As a consequence, the population of the area is dropping—the state has lost about 18 percent of its population over the years.

The Blue Earth Book has until December 28th to reach its funding goal. For more photography by the photographers featured here, visit the links below or see the BEA website.