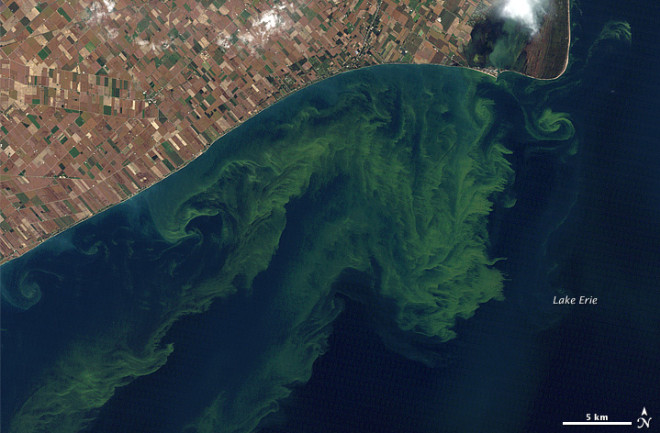 Landsat image of the 2011 algae bloom in Lake Erie. Image courtesy of NASA's Earth Observatory. In 2011, Lake Erie experienced the largest algae bloom in its recorded history. At its peak in October, the mat of green scum on the lake's surface was nearly four inches thick and covered an area of almost 2,000 square miles. That's three times larger than any other bloom in the lake, ever. Plus it was toxic. Now research shows that such an event may become increasingly common. Algae blooms result from an excess of nutrients like nitrogen and phosphorus in the water, which throw aquatic ecosystems out of whack. The algae feed off the nutrients and grow so thick that they block sunlight, preventing other plants from photosynthesizing. And as the algae die, bacteria consume copious amounts of oxygen to decompose them, killing fish and other animals in the process. When the nutrient-loading gets really bad, it can sometimes lead to hypoxic, low-oxygen conditions, resulting in ecological dead zones like the one in the Gulf of Mexico. To make matters worse, certain strains of blue-green algae are toxic, which makes these blooms dangerous to more than just lake-dwelling life. In the case of the 2011 bloom in Lake Erie, the researchers determined that blue-green algae accounted for the majority of the bloom, and concentrations of the toxic stuff reached 4,500 μg/L, which is 225 times greater than the maximum that the World Health Organization recommends for water used for swimming and boating. One of the major source of nutrient loading in lakes is agricultural runoff from within a lake's watershed---the area of land which drains to the lake. After nutrient loading in Lake Erie and the rest of the Great Lakes got really bad in the 60s and 70s, the U.S. and Canadian governments implemented the Great Lakes Water Quality Agreement to reduce nutrient loading to these iconic bodies of freshwater. For the next few decades, the agreement showed promising results, but in the 90s the nutrient concentrations began to creep back up. In the years leading up to the 2011 bloom, the number and size of farms in Lake Erie's watershed didn't really change much, so what caused the massive explosion of algae growth? Researchers say it's a combination of how farmers apply their fertilizer, and changing climate conditions, according to the study they published today in the Proceedings of the National Academy of Science.

The bloom in the western portion of Lake Erie, shown here in comparison to the other four Great Lakes. Image courtesy of NASA's Earth Observatory. When the weather allows it, farmers will apply their fertilizer in the fall instead of having to wait for the ground to thaw in the spring. And instead of injecting the fertilizer into the soil, they typically just apply it to the surface. Tilling the soil can expose even more nutrients. Most years, these methods work well for the farmers and the lakes alike, but the weather in 2011 turned the tables. Conditions were ideal for fertilizer application in the fall before the 2011 growing season, which meant that many farmers spread it on thick. But a wet spring brought a series of major storms that washed tons of this nutrient-rich fertilizer and soil into Lake Erie. Warm weather and calm winds made it worse. The water in the lake wasn't circulating much, which gave the algae a long, undisturbed incubation period. And after the algae bloomed, conditions stayed warm and still for most of the season, so algae stayed at the surface instead of being blown around by the wind and mixed into the water column to flush it from the system. Unfortunately the 2011 bloom wasn't just a fluke. The researchers say the massive bloom in 2011 will be a vision of the future unless drastic policy changes are implemented. Nutrient loading dropped dramatically in 2012, perhaps because most of the Midwest was experiencing a drought. But the researchers say that with biofuel production on the rise, an increasing number of acres will be planted with fertilizer-intensive crops like corn in the years to come. And climate change suggests a future with warmer weather and larger, more frequent rainstorms, meaning blooms like the beast in 2011 are likely to become the norm rather than the exception. Want to read more? Check out DISCOVER blogger Tom Yulsman's post on toxic green slime.