Carbon dioxide may be the greenhouse gas we hear about most often, and with good reason: It's by far the most abundant heat-trapping culprit produced by human sources, and it's also one that individuals can do a lot to reduce. But methane is actually 20 times more powerful as a greenhouse gas than carbon dioxide, and about 18 percent of methane from human activities is produced in the guts of our livestock (released mostly via belching, not the back end). Kangaroos, on the other hand, don't produce the stuff. So now, researchers in Australia want to reduce methane from cattle and sheep by introducing digestive bacteria from kangaroo guts into livestock. They say they're still a few years away from a successful transfer. Meanwhile, other options under investigation for cutting cow methane include garlic supplements in feed (yum, pre-seasoned beef), or just using feed plants that are easier to digest. 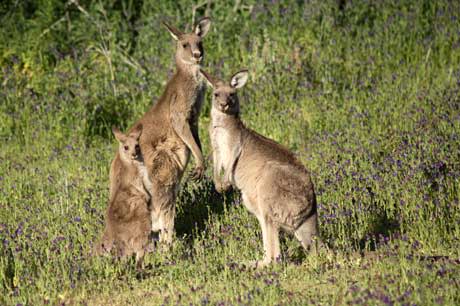 And lest you worry about your own digestive contributions, fear not: according to the EPA, methane emissions from the human body are insignificant.