Just Your Average Infestation: Despite Fears, No More NYC Street Rats Than Normal Since Sandy 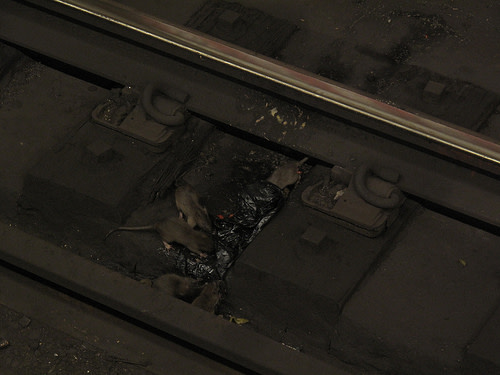 Ratpocolypse, flood of rats, the ra(p)ture...Ever since Hurricane Sandy flooded New York City's subway systems, reporters have been waxing biblical as they wonder: what happened to all the rodents who once scampered and snacked in New York City's tunnels? People aren't sure how many rats there were to begin with---28

, perhaps---but though many may have died in the storm, people expected to see swarms of them appearing on the street

after the storm, feasting on tasty, soggy storm debris. So far, New Yorkers seem to have been spared that sight. Reporters have tried to reconstruct the rat hurricane experience

: When the storm hit, city rats could have been safe deep underground in their burrows, far below the level where water can seep, but many were probably out looking for food, which brought them into the subway tunnels. The flood probably drowned babies and weaker rats in the tunnels and drove others to the streets. Yet the anticipated rat-rush has not come yet; Sam Miller, assistant commissioner for public affairs at the city's Department of Health and Mental Hygiene told New York Magazine

that they have not seen an increase in street rats. And that's a relief, since---New Yorkers, let's be honest---the above-ground rat complement during normal times is already substantial.