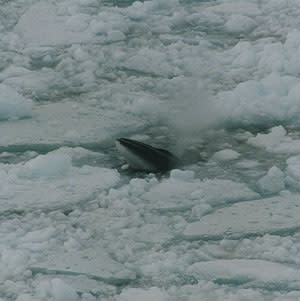 The anti-whaling movement hit its peak in 1986, when the International Whaling Commission

banned all commercial whaling. Despite the ruling, however, the privately funded Institute of Cetacean Research

in Japan has continued whaling by exploiting a loophole in the moratorium that allows some whaling for research purposes. But now, in a report by the government-run Fisheries Agency of Japan, the country has publicly considered ending its whaling efforts in the Antarctic Ocean (aka Southern Ocean), according to Yomiuri Shimbun

, one of Japan's five national newspapers. In recent years, Japanese whalers in the Antarctic Ocean have been harassed by Sea Shepherd

after catching only a fraction of its intended 945 minke whales (Sea Shepherd maintains that the fleet caught no more than 100 whales, but Japanese officials place the number closer to 170). A recent study estimated the long-term population of minke whales in the Southern Hemisphere to be about 670,000

. In the recent report, most of the Fisheries Agency review panel suggested that the country continue its efforts, but a minority said: "If we cannot gain understanding on the research whaling in the international community, we should scale it down or halt it." Aside from the lack of international support, the report points to the financial issues tied to Antarctic whaling, stating that whaling is costing the country about $35 million per year

(though the figure may be upwards of $60 million

, the country's major trading partner. It's important to note that even if Japan temporarily shut downs its Antarctic whale hunts, it will continue to hunt in the North Pacific. [via DiscoveryNews