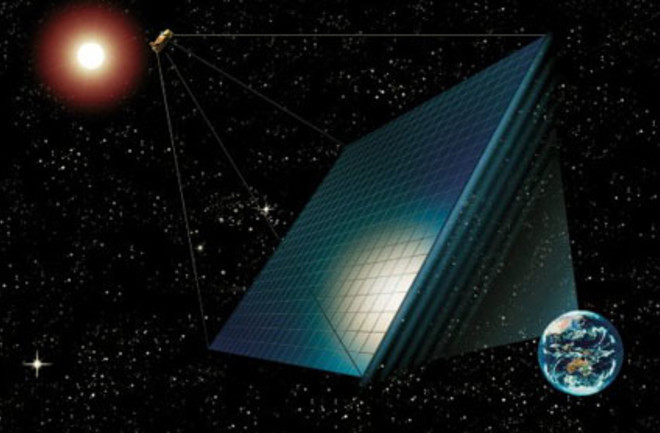 Refusing to cave to the "that's far too crazy to ever work" crowd, Japan took a step forward this week in the country's scheme to develop a giant solar power station in Earth orbit. JAXA, the Japan Aerospace Exploration Agency, selected major Japanese firms like Mitsubishi Electric, Fujitsu, and Sharp to help develop the gargantuan project. JAXA wants a system that can produce 1 gigawatt of electricity by 2030, and at one-sixth the cost Japan currently pays for electricity. The solar cells would capture the solar energy, which is at least five times stronger in space than on Earth, and beam it down to the ground through clusters of lasers or microwaves. These would be collected by gigantic parabolic antennae, likely to be located in restricted areas at sea or on dam reservoirs [AFP]. There the energy would be converted to electricity. Japan isn't alone; California utility Pacific Gas & Electric asked for regulatory approval of a similar project in April, though both schemes must confront a mountain of challenges. Sending equipment up to space is one. Operating and maintaining the system cost effectively is another. How about minimizing losses during conversion and transmission of energy [Greentech Media]? And even if space solar power works, proponents might need to hire some talented public relations professionals: JAXA said the technology would be safe but conceded it might have to dispel fears of laser beams from above roasting birds or slicing up aircraft in mid-air [Sky News]. Related Content: 80beats: Europe’s Plan to Draw Solar Power From the Sahara Moves Ahead 80beats: Bizarro Solar Cars Race Across the Australian Outback 80beats: California Wants to Draw Energy From the World’s First Orbiting Solar Farm 80beats: Experiment Is First Step Toward Solar Power Beamed From Satellites