Japan Disaster Was Two Tsunamis Rolled into One 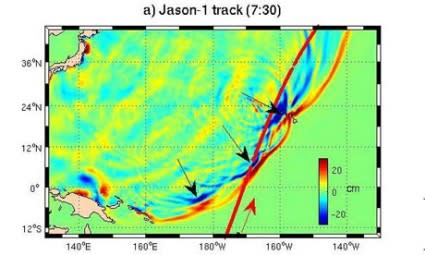 Satellite radar data showed two wave fronts combining into a doubly tall tsunami off the coast of Japan on March 11.

The tsunami that spawned by the 9.0 earthquake off Japan this March

was a disaster of massive proportions, reaching heights of over 130 feet

in some areas and traveling up to six miles inland in others. Scientists at NASA and Ohio State University have now found another factor, beyond the sheer strength of the quake, that made the tsunami so ferocious: It started out as two separate walls of waves that combined to form one taller, more powerful "merging tsunami."

Three different satellites happened to fly over the tsunami on March 11. Using their onboard radar altimeters

, the satellites could gauge sea level changes within inches, producing a detailed picture of how the tsunami developed---and why it was so destructive when it hit land. As NASA explains

Data from NASA and European radar satellites captured at least two wave fronts that day. The fronts merged to form a single, double-high wave far out at sea. This wave was capable of traveling long distances without losing power. Ocean ridges and undersea mountain chains pushed the waves together along certain directions from the tsunami's origin.

While scientists have long suspected that such merging tsunamis exist, this is the first time they've been able to observe one. Understanding how and where these extra-strength tsunamis form, the researchers say, could help them build more accurate hazard maps for coastal areas. [via NASA