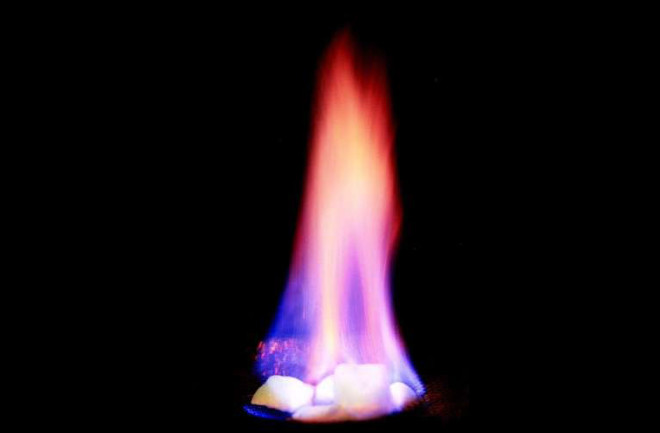 Gas hydrates are called "flammable ice;" here the chunks of ice actively burn. Credit: USGS Two years after the Fukushima meltdown, most of Japan's nuclear reactors remain shuttered, and that anniversary this week has sparked discussion about Japan's energy sources. The country has depended almost exclusively on imported fossil fuels since the disaster. But in news announced today, Japan has become the first country to successfully extract methane from frozen reserves under the ocean floor, opening a new potential energy source for the country. Methane is the primary component of natural gas but methane hydrate offers an even more concentrated source. One cubic foot of hydrate traps about 164 cubic feet of methane gas, according to the U.S. Geological Survey. The methane in hydrate is frozen within an ice lattice, forming a sherbet-like substance. To get the methane gas out, Japanese engineers used a depressurization method that turns methane hydrate into methane gas. Extraction began this morning, about 30 miles offshore of Japan's main island and at a depth of around 1,000 feet below the seabed.

In August President Obama announced research funding to tap into methane hydrates; the BBC reports that Canada and China are also pursuing methane hydrates as an energy source. That could be a boon for natural gas production---the U.S. Geological Survey has estimated that existing gas hydrates (of which methane hydrates are one type) contain twice as much carbon as all other global fossil fuels. Known deposits of methane hydrates could satisfy current levels of natural gas usage for 1,000 years, according to USGS. But the nascent technology faces many unknown risks and potential technical hurdles, such as destabilization of the overlying ocean floor. Reuters reports that Japan intends to produce methane commercially from hydrates within six years.