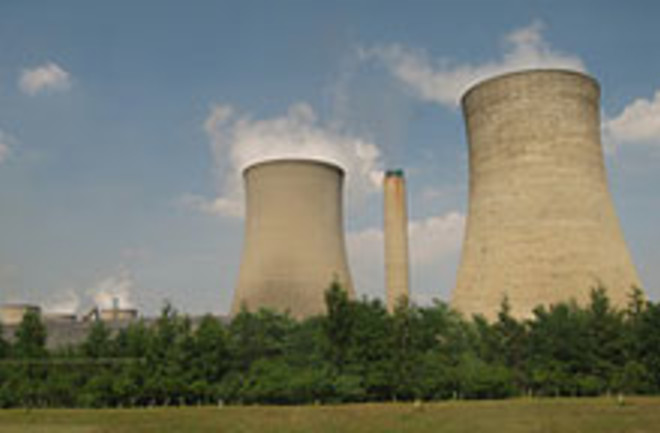 Not a single new nuclear power plant has been built in the United States in the past 30 years, but if presidential candidate John McCain gets his way they'll soon be sprouting up like mushrooms. In a speech on energy policy yesterday, McCain called for the construction of 45 nuclear reactors by the year 2030, and said that his ultimate goal is 100 new nuclear plants. The Arizona senator also vowed to spend $2 billion on research into clean-burning coal. "This single achievement will open vast amounts of our oldest and most abundant resource," McCain, 71, said. "It will deliver not only electricity but jobs to some of the areas hardest hit by our economic troubles" [Bloomberg]. McCain is in the midst of a speaking tour in which he's offering his ideas on energy policy; his proposal to embrace coal and nuclear energy came two days after he called for lifting the ban on oil drilling in U.S. coastal waters. While all three of these proposals are guaranteed to anger environmental groups, his vision of dozens of new nuclear reactors scattered around the United States is likely to stir up the most controversy.

In his speech, he didn't address some of the toughest questions regarding nuclear power. McCain did not explain how he would dispose of the radioactive waste from the dozens of new reactors he proposed, or how he would deal with the intense political passions the issue generates. Nor did McCain say what steps he would take to accelerate the complex licensing and testing procedures needed to build and operate a nuclear plant, or how he would convince Wall Street to invest the estimated $5 billion to $10 billion required for each plant [Los Angeles Times].

Although questions remain about both safety and economics, there has been a shift of opinion in the industry and among some environmentalists toward more nuclear power — it is clean and far safer than at the time of the Three Mile Island nuclear accident in 1979 [

The New York Times]. That shift has been partially caused by growing concerns over global warming; nuclear reactors don't emit the greenhouse gases that both coal and natural gas power plants pump into the air. McCain tried to build on the new appreciation of nuclear power by casting his decision the environmentally responsible choice.

"Every year, [nuclear] reactors alone spare the atmosphere from the equivalent of nearly all auto emissions in America. Yet for all these benefits, we have not broken ground on a single nuclear plant in over 30 years," he said [The Wall Street Journal, subscription required].

Related Post: You Know What This Spot Could Use? An Oil Well.