Earth's mysterious inner landscape is a topsy-turvy place where sediment may rain upward out of a sloshing iron ocean and collect in upside-down basins some 1,800 miles below the surface, says Bruce Buffett, a geophysicist at the University of British Columbia. Buffett's theory is based on studies of nutation, a slight periodic wobble of Earth's axis. Scientists have long wondered how tides in Earth's liquid-iron outer core subtly reverberate in our planet's outer layers, the mantle and crust. Buffett proposes that there may be a layer of electrically conductive sand between the core and mantle that creates a magnetic bond between the two, tugging at the mantle as the core sloshes. "The strength of this tugging, in turn, affects how Earth's surface shifts," says Buffett. He believes the conductive layer forms as bits of silicate precipitate out of the core and float up, carrying along stray iron droplets. Alas, human eyes will never see Earth's inverted, buried ocean. The world's deepest borehole took more than a decade to dig, yet it reached less than 1/200th of the way to the core-mantle boundary. 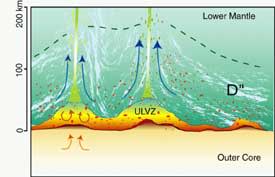 Bits of sediment freezing out of Earth's core may collect in upside-down basins and eventually sweep rare metals toward the crust. Photo by Ed Garnero