Is the Cash-for-Clunkers Program an Environmental Dud? 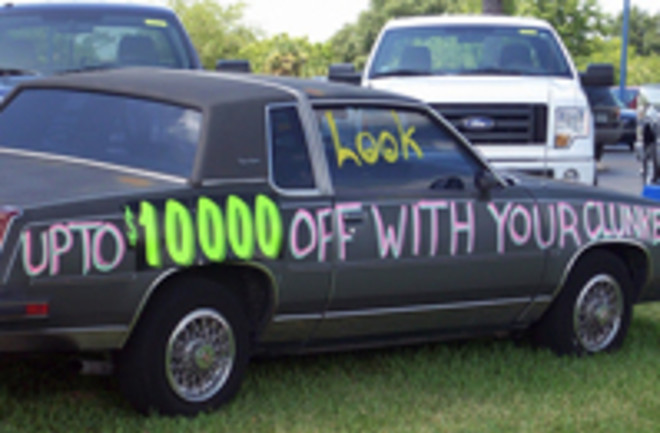 The popular "cash-for-clunkers" program instated by the federal government is clearly giving a boost to struggling auto companies by convincing people to trade in their old gas-guzzlers for new, fuel-efficient vehicles: More

than 240,000 Americans have traded in their clunkers so far, and the program has already burned through its first round of funding [Time].

But as Congress debates adding $2 billion to the program, some calculations show that it may have only negligible environmental benefits. The program's rules are lenient enough to raise the ire of some environmentalists--new passenger cars must have a fuel efficiency rating of only 22 miles per gallon, and must be only 4 miles per gallon more efficient than the old car being traded in for a consumer to get the $3,500 credit. Still, people have embraced not just the letter but the spirit of the law. Consumers

are snapping up fuel-sipping cars, led by the Ford Focus and followed by models from Honda and Toyota. The average mileage of the clunkers was 15.8; the new cars average 25.4 miles a gallon. That’s a 61% improvement—much more than the program’s rules required [The Wall Street Journal, blog].

That all sounds like good news. But new calculations show that the improvements in fuel efficiency (and therefore the reduction in tailpipe emissions of greenhouse gases) will have little overall impact, because the program is relatively small.

Calculations by The Associated Press, using Department of Transportation figures, show that replacing those fuel hogs will reduce carbon dioxide emissions by just under 700,000 tons a year. While that may sound impressive, it's nothing compared to what the U.S. spewed last year: nearly 6.4 billion tons.... That means on average, every hour, America emits 728,000 tons of carbon dioxide. The total savings per year from cash for clunkers translates to about 57 minutes of America's output of the chief greenhouse gas [AP].

Some researchers also worry about a phenomenon known as the efficiency paradox:

as we get more efficient at using energy — through less wasteful cars and appliances — the overall cost of energy goes down, but we respond by using more of it. In the case of cars, that means driving more [Time].

Energy policy expert Michael Gerrard says that the cash-for-clunkers program can still be viewed as a success, but, ironically, it's simply not a very efficient program.

"It's not that it's a bad idea; just don't sell it as a cost-effective energy savings method," he said. "From an economic standpoint it seems to be a roaring success. From an environment and energy perspective, it's not where you would put your first dollar" [AP].