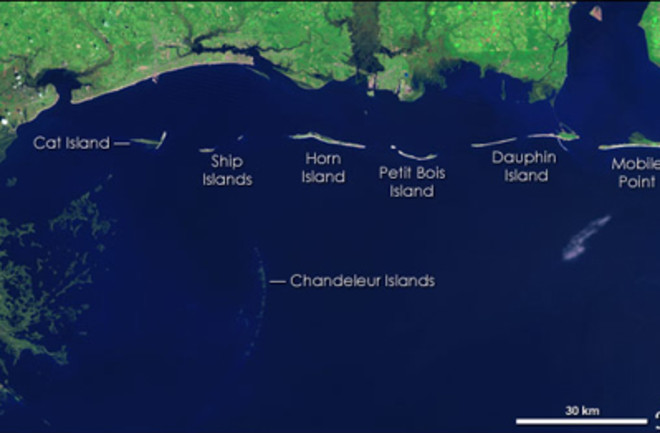 Build a wall of sand: That was Louisiana Governor Bobby Jindal's answer to protecting the state's delicate marshlands when it became clear that BP wasn't going to stop its gushing oil leak anytime soon. But now the federal government has put the kibosh on Louisiana's construction, saying that the project to save one ecologically sensitive area will ruin another.

Scientists raised several objections to the state's first proposal last month to build a long line of sand berms on 10 May. One key concern was that taking sand from in front of the Chandeleur Islands would make them more vulnerable to erosion. The state agreed to change its approach by taking sand from a site further away and then pumping it through pipes to build the berms [ScienceNOW].

However, that didn't happen. Louisiana officials said they couldn't get the pipes built in time, and asked the feds to let them dredge near Chandeleur at least until the other site was ready. OK, the Interior Department said—you've got a week. That week has lapsed, but Louisiana is still requesting more time to dredge near Chandeleur, promising to return the sand once the berm project has done its job. That didn't impress Tom Strickland, the Assistant Interior Secretary for Fish, Wildlife and Parks. He says dredging more material puts the already-eroding Chandeleurs at too much risk.

The Chandeleurs, in the Breton National Wildlife Refuge east of the Mississippi, are nesting grounds for species such as the brown pelican, and they are part of a diminishing natural hurricane barrier for Louisiana. Federal and state officials hope to someday fully restore the islands, which have been eroding for decades. Strickland said the berms are expected to last only about 90 days, maybe not even that long in an active hurricane season [BusinessWeek].

Even if you put the sand back there once you're done with it, he says, it won't be packed in or bonded like it was before, and might be washed away more easily. The feds' sudden outburst of concern failed to impress the already frustrated Gov. Jindal.

"We've been losing 300 feet every year off these islands -- where has the federal government been?" he told reporters after touring the dredging site Wednesday. "All of a sudden when we're building new land to protect our coast, they're worried about a hypothetical" [CNN].

80beats: From Marsh Grass to Manatees: The Next Wave of Life Endangered by BP’s Oil

80beats: Obama’s Speech on the Oil Spill: What Do You Think of His “Battle Plan”?