Is Global Warming a Boon for the Yellow-Bellied Marmot? 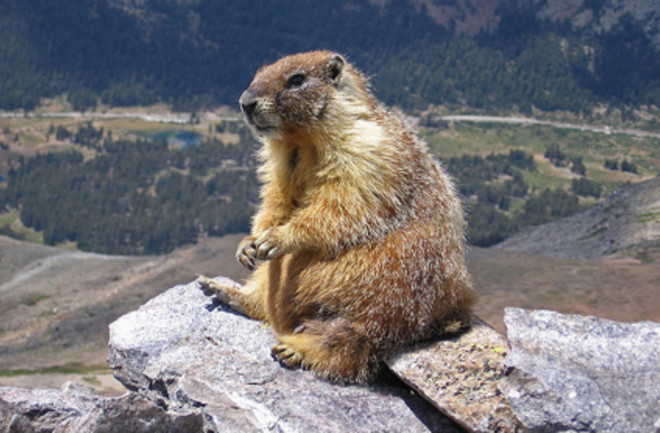 Yellow-bellied marmots are taking to global warming just fine—so far. A Naturestudy of the hibernating Rocky Mountain-dwellers found that over the last 30-plus years, the marmots have grown both in girth and in population, and the researchers think they know why. Study author Arpat Ozgul says that the marmots have limited time to accomplish the things on their summertime agenda—namely, eating, mating, and giving birth before they crawl back into their seven- to eight-month hibernation.

But as the Colorado summers have grown longer, so too has the time the marmots have to do all of these things—and do them better. This extra preparation (and reproduction) time means that "they are more likely to succeed and survive," said Ozgul [Scientific American].

Because of the extra time, marmots studied grew in average weight from approximately 6.8 pounds to 7.5. And since 2001 the marmot population has exploded, adding an average of 14 individuals each year; in the previous 25 years the population growth rate was only .56 per year. However, there are confounding factors that make it hard to be sure that the changes in the marmots are tied just to temperature and waking early from hibernation. Take the example Marcel Visser points out in an accompanying commentary

The population of one of the marmot's foods, tall bluebell flowers, began to decline in 2000, just before the marmot population surged; this might have altered the marmots' diet, leading them towards fattier foods [Nature].

There's such a thing as too many marmots, also. But, coauthor Daniel Blumstein says, this will probably sort itself out.

As Blumstein reminded, "before we start worrying about being knee-deep in marmots, populations of predators and prey are often linked, and we've had a concomitant increase in the predators (foxes and coyotes) in some of our colonies" [Discovery News].

And besides the good times for their predators, marmots face another threat: drought. They don't cope well with drought in the late summer, so if their habitat gets drier, that could reverse the good fortune that a warmer climate seems to bring them. Related Content: 80beats: What Can We Learn from the Naked Mole Rat's Immunity to Cancer?

80beats: Monogamous Rodents Lose Their Mojo When Their Mates Are Gone