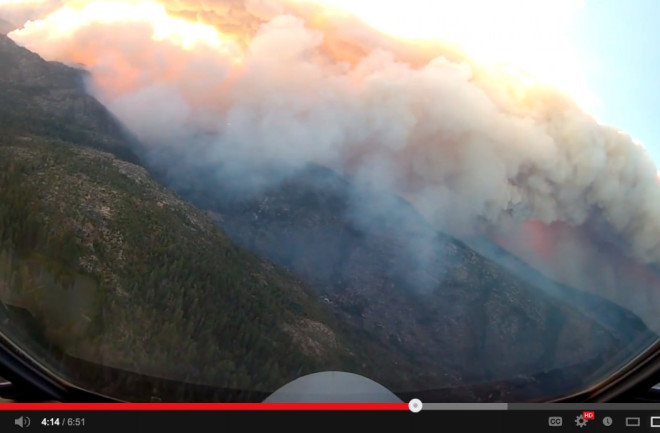 A screenshot from a video showing the view from the cockpit of a California Air National Guard aircraft making drop of flame retardant on the Rim Fire. Click for the video. Updated with comments from author Michael Kodas 9/3/13 | The image above is a screenshot from a mind-blowing video shot from the cockpit of a California Air National Guard C130J aircraft as the crew gets ready to drop fire retardant on the massive Rim Fire. As I watched the video, I was struck by how low and slow these aircraft fly — and the risks taken by the crews. Is it worth the risk? The answer is not entirely clear. More about that in a minute. But first, make sure to click on the image and watch the video. For me, a few things stand out. At about two minutes into the video, as the tanker is approaching the wildfire, someone in the crew says, "Oh, that's kind of creepy." About two minutes later, as the plane is banking directly toward a wall of flames and smoke, he says, "That is unreal." And as if the view of Hades out of the cockpit window isn't enough to create a sense of unreality, a synthesized female voice can be heard repeating, "LANDING GEAR, LANDING GEAR, LANDING GEAR," over and over. On a regular flight, this is supposed to remind the crew as they descend toward the ground not to do a belly landing. But in this situation, the point isn't to land but to fly down to almost treetop level adjacent to a blazing inferno and, at low speed, drop retardant. After watching the video, I've gained even more respect for what these crews do. With numerous deadly crashes over the years, including the one below captured in an amateur video, it's obvious that they risk their lives every time they fly over a fire. http://www.youtube.com/watch?feature=player_embedded&v=4bDNCac2N1o Are the risks they take worth it? Some say no — because, they argue, there is little evidence that dropping retardants on a fire actually makes much of a difference. Among them is Richard A. Minnich, an expert in fire ecology at the University of California, Riverside. I interviewed him earlier this summer, when California's wildfire season was just getting started. In a phone conversation, he told me that fighting wildfires with retardant drops is "founded on a myth." In explaining why he believes that, he says "count the calories." What he means is this: Compare how much of a fire's energy is prevented from expanding by a drop — "negative calories," he calls this — versus how much energy comprises the fire overall. From my interview:

For every calorie an aircraft drops on land, during that moment of time when we’ve added negative calories . . . while that is happening, the flame line is putting out a thousand or a million calories. It's not even close. The assumption is that we can just draw lines in the sand. They paint the landscape with [fire retardant] and the fires just go right past them. And only thousands of acres later does the fire stop. And guess what? Rain puts it out.

Others have a similar perspective, among them Andy Stahl, executive director of Forest Service Employees for Environmental Ethics, or FSEE. "It looks good on television," he said of retardant in an interview with Marc Lallanilla at Live Science. However, "there is no benefit to its use." Moreover, retardants can have negative environmental impacts, including triggering algae blooms that can kill fish. For it's part, the Forest Service says it has taken steps to minimize environmental risks, and that laboratory testing as well as the experience of firefighters on the ground both show that retardant can help crews launch an effective ground attack. "When enough people in enough places say retardant helps, we have to believe they're not making it up," Cecilia Johnson, fire chemicals technical specialist at the Forest Service's Missoula Technology and Development Center, told the Associated Press last year. My colleague at the Center for Environmental Journalism, Michael Kodas, is writing a book (it will be the book) about wildfire. He's done quite a lot of reporting on this issue, and I've emailed him to get his perspective. As soon as I hear back from him, I'll post an update. Update 9/3/13, 9:45p MDT: Michael got back to me. Here's what he had to say in an email message:

Stahl and Johnson do a good job defining opposite ends of the issue. I interviewed them both for a story I did for OnEarth.org last year. Even ten years ago, firefighters were calling retardant drops "CNN drops," because they are often called for in situations where they look good on television but will have little impact on the fire. Part of the problem is that in much of the West, wildfires are wind driven events. During the Fourmile Canyon fire, here in Boulder, I heard one contractor announce that the fire wouldn't have destroyed all the homes it did if they had just put his planes in the air when it broke out, but the wind was ripping at more than 60 miles an hour at that point. It's pretty difficult to fly a plane at low speeds into a canyon to drop retardant in those conditions, and often the wind just blows the retardant away. Last year two P2V air tankers crashed on the same day - one belly landed in Utah and the crew survived. The other crashed into a fire in Nevada killing its two crew members. A couple months later a C130 from the Air National Guard crashed while dropping retardant, killing four members of its crew from the North Carolina Air National Guard. Statistically, according to Andy Stahl, firefighters' odds of dying fighting a fire go up tenfold when they climb into a plane. There's a lot of politics behind getting the planes in the air. For one thing, the contractors with the planes want the work and politicians strive to get it to them. It's also something that make government leaders look like they're doing something about a disaster that they actually have little control over and, to some degree, appeases their constituents.