In the aftermath of Hurricane Patricia, striking animations show where her water went

Forecast streamflow in Texas and surrounding states between Oct. 24 and 26. The yellow, orange and red tones that ripple across the map include the impact of rainfall from the remnants of Hurricane Patricia. (Source: FLASH/OU-CIMMS/NOAA/NSSL) The coastal mountains where Hurricane Patricia made landfall on Friday, Oct. 23 helped shred the powerful storm as it sped inland. That along with other factors helped limit the damage from what had been the strongest reliably measured tropical cyclone on record.

Remarkably, no one was killed. Even so, a huge amount of atmospheric moisture continued to move northeastward toward Texas. Where did it wind up? You can see at least part of the answer in the form of the beautifully compelling animation above. It shows streamflow as estimated by a system called FLASH ("Flooded Locations and Simulated Hydrographs"). FLASH uses a model fed by rainfall estimates to calculate how much water will move through streams and rivers. In this case, you're looking at an estimate covering the period between Oct. 24 and 26. That rippling wave of yellow, orange and red colors moving south in Texas, and then east along the coast into Louisiana and Mississippi, shows simulated high water flows pulsing down streams and rivers. The result: widespread flooding. But not catastrophic, thank goodness. All that water came from two sources. The first was a rainfall event between Thursday and Saturday brought about by a weather system interacting with a rich source of atmospheric moisture from the Gulf of Mexico. That sent a first pulse of water rushing south through Texas. Then, the remnants of Patricia blew in from the southwest, moving along the Texas coast Saturday night and Sunday. The movement of high water in the waterways along the coast seen in the FLASH animation reflects the movement of those moist remnants. https://www.youtube.com/watch?v=tiSV5MqERTA&feature=youtu.be The video above shows some of the storminess that produced all of the moisture that wound up coursing down those waterways. It's an animation of infrared images from the GOES-13 weather satellite. At the beginning, you can see Hurricane Patricia making landfall along the Pacific coast of Mexico (lower left). Rich moisture from Patricia's remnants then speeds northeast along the Gulf Coast. 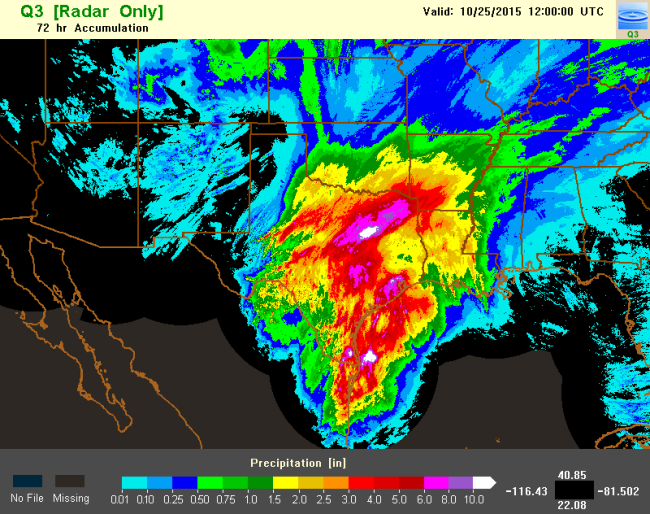 Estimated total precipitation over 72 hours, ending on Sunday, Oct. 25, 2015. (Source: MRMS/University of Oklahoma/NOAA/NSSL) Lastly, the image above shows an estimate for how much precipitation actually fell between Monday and Sunday. Quite a lot, but not as much as had been feared. All in all, both Mexico and the Gulf Coast of the United States really dodged a bullet.

Can Your Community Handle a Natural Disaster and Coronavirus at the Same Time?