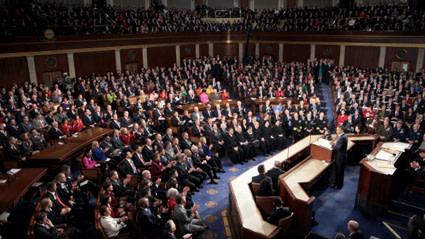 At least now we know what the title of President Obama's self-help book will be: "Winning the future." Last night, in the third State of the Union Address of Obama's presidency, he began by extolling the need for the country to compete with other rising nations for the jobs of the future (and using some version of his new catchphrase multiple times). The President hit many notes that have science and technology advocates smiling this morning, including his call to turn around yesterday's sobering statistics about the lack of science proficiency of American students.

The world has changed, Obama told Congress, and the US will only retain its competitive edge over nations like China and India if it invests in a skilled workforce and cutting-edge science and technology: "We need to out-innovate, out-educate, and out-build the rest of the world." [New Scientist]

Obama went on to urge parents to get their kids' priorities straight, and uttered the line that may have tickled science geeks the most:

The President also called for more funding for biomedical, renewable energy, and other research to launch a wave of innovation. Obama deemed this our "Sputnik moment,"

comparing it to the moment in the late 1950s when the Soviet Union launched the first satellite and the U.S. raced to catch up to and then surpass Soviet space science. But, of course, the space race required a lot of government spending

Obama tried to pitch a more precise vision of spending, one in which government nudged investment rather than picking winners and losers in industry. He said he wanted to "spark" innovation. He wanted to encourage states to come up with programs to improve education and tempt companies to compete for federal dollars by coming up with innovative ideas. "We're not just handing out money. We're issuing a challenge," he said. [Slate]

In specific goals, the President declared that the country would see a million electric cars

"And to help pay for it, I'm asking Congress to eliminate the billions in taxpayer dollars we currently give to oil companies. I don't know if ... you've noticed, but they're doing just fine on their own. So instead of subsidizing yesterday's energy, let's invest in tomorrow's."

" to replace his predecessor's "No Child Left Behind

,") the President also called for us to redouble our efforts in repairing and expanding America's crumbling infrastructure. Within five years, 98 percent of Americans should have high-speed wireless, he said, and 80 percent of Americans should have high-speed rail access within a quarter century. But in the nonpartisan spirit of the evening, Obama failed to mention that Republicans have torpedoed transportation infrastructure projects

as a way to say they don't want Washington's money. Related Content: 80beats: The Nation's Science Report Card Is Out, And It's Not Pretty

DISCOVER: The Man Who Launched the Space Age

: How do you grow a bumper crop of great math and science teachers? Image: White House