Image of the Day: Colorado Plateau Under Snow 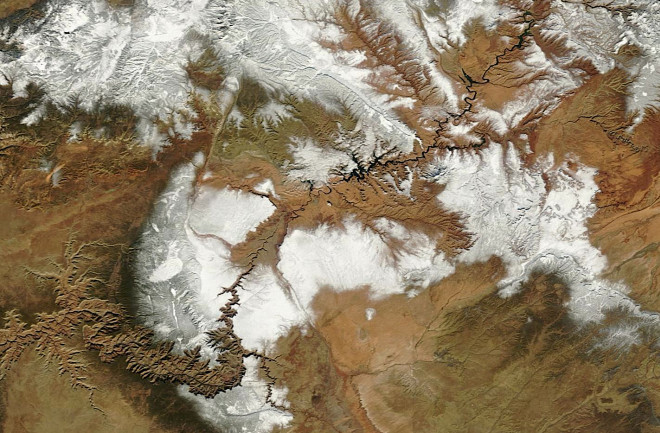 Satellite image of the Colorado Plateau acquired on Nov. 26th, 2013. (Source: NASA) Snow blankets the higher terrain at the heart of the 130,000 square-mile Colorado Plateau in this image captured by NASA's Terra satellite yesterday. Left behind by the same storm system that's now hammering the East Coast, the snow frames the deeply incised canyonlands of the Colorado River and its tributaries, which runs diagonally across the image. At lower left, where the river makes a big bend, you can spot the Grand Canyon. It bisects the Kaibab Plateau (part of the bigger Colorado Plateau), which reaches an elevation 9,241 feet above sea level. The darker, greenish coloring that edges the snow-covered area is indicative of forests that grow on this higher ground. Also visible in the image is Lake Powell, the reservoir on the Colorado River that serves as a massive hydrologic savings bank for some 30 million people in seven states and Mexico who depend on water from the river and its tributaries. The snow is a good sign for a region plagued by drought for more than 10 years. And with that let me wish everyone a very happy Thanksgiving!