Image of the Day: Carbon County Utah Lives Up to Its Name 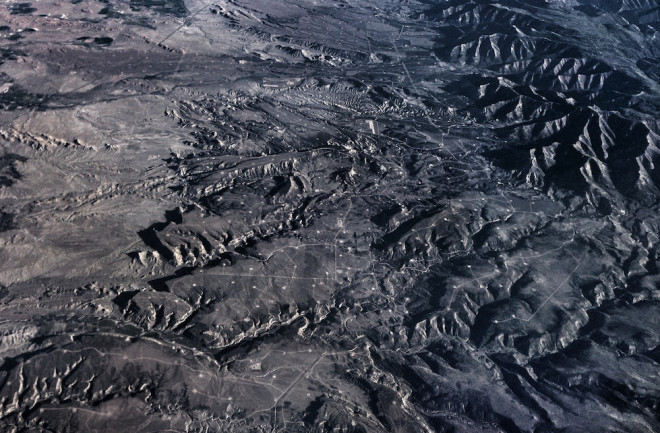 Well pads in Carbon County, Utah, as seen from a commercial airliner in June, 2013. Shot on my iPhone and processed to heighten contrast and definition. (Photo: © Tom Yulsman) Natural gas wells and their access roads mark the landscape in this iPhone photograph I snapped from while flying over Carbon, County, Utah last June. At the time, I was on the last leg of a long journey back from Cambodia, headed home to Colorado. This time, as I always try to do, I grabbed a window seat to satisfy my intense fascination with the way landforms look from the air, and how we humans have altered it. From my window seats over the past the past ten years or so, I've witnessed a big upsurge in oil and gas development in the West, made possible in large measure by hydraulic fracturing, also known as fracking. That practice was in the news last week here in Colorado where I live, when voters in three cities passed measures on election day to ban fracking within their borders. A ban was narrowly rejected in a fourth city. With that in mind, I thought this would make newsworthy image of the day. Natural gas development in the United States has brought economic benefits and also contributed to a reduction in U.S. energy-related carbon dioxide emissions to levels not seen since 1994, according to the U.S. Energy Information Administration. It has also brought environmental impacts and controversy, particularly over fracking. My intent in publishing the photo above, and another one toward the end, is not to draw conclusions over the balance between those benefits and impacts, but simply to show (in a somewhat artistic manner) how energy development has left a clear imprint on the land. I'm sure different people will draw different conclusions about this. So please feel free to share your thoughts below.

As its name might suggest, Carbon County, as with Utah overall, has seen its share of energy development. Click on the thumbnail at right for a graph from the State of Utah Division of Oil, Gas and Mining showing the growth in applications for drilling permits. Also, check out this Google Earth Engine timelapse of Landsat imagery of this area of Carbon County, near the town of Price:

Click to play a Google Earth Engine timelapse of Landsat images. (Source: Google Earth Engine) In the timelapse, which begins in the 1980s, drilling pads and access roads start to make an appearance in the year 2000. Make sure to zoom out to get a fuller sense of the scope of energy development in this part of Utah. You can also move the map around and find other areas where drilling has left an imprint on the landscape. Here's a map of active wells centered roughly on the area I flew over:

In the map, each of the red sun-like symbols marks a producing gas well.

Last but not least, another aerial iPhone photo. With this one, like the first photo, I took artistic license with contrast, definition and color:

Aerial iPhone photo of gas wells in western Colorado. (Photo: © Tom Yulsman) Like Utah, Colorado has also experienced a boom in oil and gas development. According to the Colorado Oil and Gas Conservation Commission