Illuminating the night with curtains of light: the aurora borealis seen from above and below 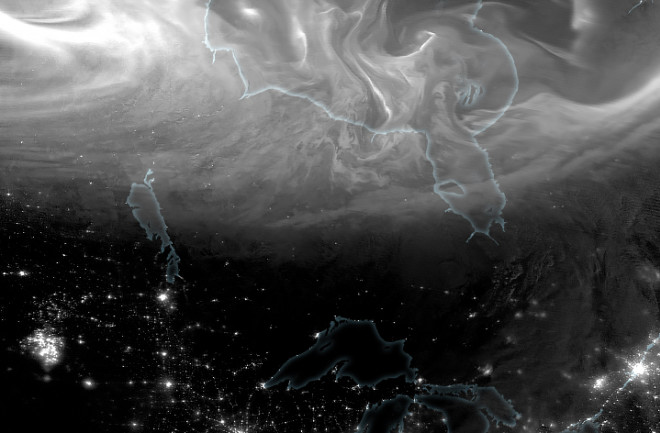 The Suomi NPP satellite captured this image of the aurora borealis while orbiting over North America on March 28, 2019. Please click on the image to view it full size. (Source: NASA Earth Observatory) I've been meaning to write a story about the aurora borealis ever since I captured photos of an astonishing display in January when I was visiting Tromsø, Norway to cover the Arctic Frontiers conference. Finally, the satellite image above offered the perfect excuse. It was captured by the Suomi NPP spacecraft as it orbited above North America on March 28, 2019. The spacecraft has a nighttime sensor that can capture relatively faint emissions of light under varying illumination conditions, including city lights and aurorae like those seen in the image above. Auroral displays occur when Earth's magnetic bubble, called the magnetosphere, is roiled by material flowing outward from the Sun. These can come from gusts of particles in the solar wind, or from more explosive emissions of plasma and magnetic energy caused by a phenomenon called coronal mass ejections. The March 28 aurora resulted from relatively minor gusts of solar wind that knocked loose electrons and protons within the magnetosphere. Following Earth's magnetic field lines toward the poles, these particles rained down on the atmosphere and caused it to glow. (For more about the March 28 event, see this article from NASA's Earth Observatory: Dazzling Spring Aurora Over Hudson Bay.) When I attend the Arctic Frontiers conference in January, the same phenomenon caused the atmosphere to glow so brightly above the city of Tromsø that the aurora was clearly visible despite a nearly full moon and light pollution from the city:

Curtains of auroral light swirl above the moon and a mountain in Tromsø, Norway, during January of 2019. (Photo: ©Tom Yulsman) To capture this photograph, I headed out with friends onto a breakwater projecting out into Tromsø harbor. We were trying to get away from as much of the city glow as possible. Despite our best attempts, that glow was still enough to faintly illuminate the slopes of the mountain visible at lower right. Part of the moon is also visible at the bottom of the image.

Auroral display over Tromsø, Norway on Jan. 24, 2019. (Photo: @Tom Yulsman) For this display, I turned my camera around on its tripod so that it faced the brightly illuminated city. I have to say that I've seen the aurora in Tromsø many times, but never this brightly. At one point, in fact, a glowing braided river of light flowed over our heads. It consisted of red, white, and green strands that seemed to be just a few hundred feet up even though the actual auroral glow was likely occurring at least 50 miles up. (By the time I got my camera set up on the tripod, that particular evanescent display had dissipated — unfortunately!) The solar activity that ultimately triggers such auroral displays has actually been in decline as part of a natural 11-year cycle. The current solar cycle, known as Cycle 24, is now close to its lowest point. It is predicted to reach solar minimum — the period when the Sun is least active — late this year or in 2020. The aurora that I witnessed in Tromsø, as well as the one seen by the Suomi NPP satellite over North America, both occurred during this period of low solar activity. Yet the displays were definitely noteworthy. In both cases, the phenomenon may have been enhanced by an alignment between the Sun's magnetic field and our own. The Sun's field extends far out into space and interacts with our planet's magnetosphere along a boundary called the "magnetopause." At this boundary, Earth's field acts as a barrier to electromagnetic radiation and particles coming from the Sun. And here's the thing: The strength of this barrier can be weakened when the magnetic field lines of the Earth and the Sun are in opposite orientations. "The Earth's magnetic field is then peeled open like an onion allowing energetic solar wind particles to stream down the field lines to hit the atmosphere over the poles," according to NASA. Because of the Earth's orientation to the Sun during both spring and fall, this effect is actually most likely to happen during those seasons. In fact, March is our most geomagnetically active month, whereas January is second lowest. That doesn't mean I needed luck to witness the aurora in Tromsø back in January. The city is located well above the Arctic Circle and at a particularly good latitude for seeing displays of the northern lights. If you're eager to witness the phenomenon for yourself, I recommend Tromsø to you very highly. It's a lovely city, and there's a good bet that you can see the aurora there during fall, winter and spring.