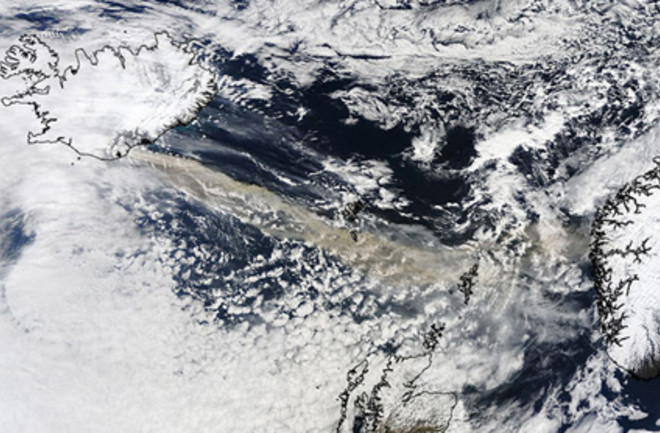 In those volcanoes that kids (or their parents) build for elementary school science fairs, the style is generally simple: There's one chamber in which the baking soda rests, ready to meet the vinegar and erupt. Most real volcanoes are a little like this, in that they have a single magma chamber that fuels their eruptions. But not Eyjafjallajökull. The Icelandic volcano that stirred in March and grounded European air travel has a peculiar kind of plumbing, scientists report today in Nature. Freysteinn Sigmundsson and colleagues combined 20 years' worth of GPS, satellite, and seismic observations of the volcano see note how it changed over the years—and especially what was happening in the lead-up to this year's eruption.

"One of the surprises was the complexity of the plumbing system," Sigmundsson said. "There was not one main magma chamber active under the volcano capturing magma in 18 years of unrest preceding the eruption, as is often envisioned in models for the most active volcanoes on Earth. Rather, two or more discrete magmatic sources were involved, with magma of different composition." The cause of Eyjafjallajökull's explosive eruption seemed to be the meeting of one body of magma, made up mostly of the common volcanic rock basalt, with another type of magma within the volcano, consisting largely of silica-rich trachyandesite. [MSNBC]

began to come to life with small earthquakes in the area and expansion of the mountain.

Eventually, the sides of the volcano bulged by more than 15 centimetres (six inches) before the first eruption began on March 20. It took almost a month for the volcano to start to deflate, which is a surprise given that volcanoes "shrink," rather like a poorly-knotted balloon, as molten rock and scorching gases flow from the chamber. [AFP]

"The explosiveness of the eruption depends on the type of magma, and the type of magma depends on the depth of its source. We're a long way from being able to predict eruptions. But if we can visualise the magma as it moves upward inside the volcano, then we will improve our understanding of the processes driving volcanic activity." [The Guardian]

Bad Astronomy: Iceland Volcano Eruption Making an Ash of Itself