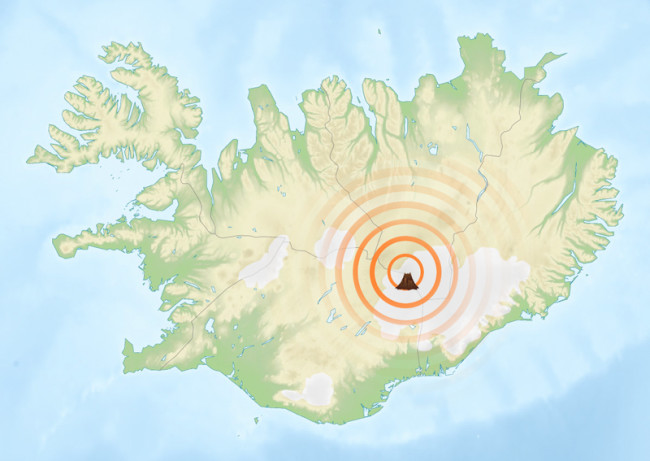 There are strong signs that one of Iceland's largest volcanoes could be about to erupt, raising fears of an ash cloud which could ground international flights.

Alarms were raised last week, when an earthquake swarm struck beneath Bardarbunga — Iceland's second-tallest volcano, situated in the center of the island nation. Worried that an eruption could be imminent, the government evacuated more than 300 people living in the vicinity of the volcano on August 20.

Since the crisis began, more than 8,000 earthquakes have hit in the region around Bardarbunga. These reflect the rise of magma from deep beneath the volcano. Yesterday, several quakes struck which were stronger than magnitude 5 — exceedingly large for volcanic earthquakes.

The peak of Bardarbunga is buried a half mile below the surface of Europe's largest glacier, Vatnajökull. If an eruption occurs below the ice, then the immediate danger would be from flooding. The heat unleashed would undoubtedly generate large volumes of meltwater, which would rapidly begin to flow away from the glacier into the surrounding plains.

But perhaps the biggest danger would come if the volcano manages to break through its frozen seal. If an eruption melted a path through the ice, then ash could become an issue. And, since volcanic ash is a risk to aircraft, an ash eruption could turn a regional disaster into a global transport crisis.

The airspace around Iceland is on the flight paths of many transatlantic routes, and the havoc caused by the 2010 eruption of Eyjafjallajökull — another Icelandic volcano — is still fresh in people's minds. The ash cloud produced by that eruption forced over 100,000 flights to be cancelled — affecting 10 million passengers and costing the airline industry $1.7 billion.

Iceland's Met Office has placed the country on orange aviation alert, the second highest level. (This was briefly raised to red on Saturday, when an eruption was wrongly reported to have begun.)

So far, lava has not met ice. But it is close. Ground deformation measurements indicate that some 8.5 billion cubic feet of magma have already flooded into the crust around Bardarbunga. At the time of writing, it had risen to a depth of 3 miles below the surface.

The intense seismic activity which has been shaking the region for days shows no sign of abating, meaning that the magma could still rise further. An eruption is still a distinct danger.

And worryingly, within the last 24 hours many of the volcanic earthquakes — which indicate the position of the magma in the subsurface — have migrated outside the margins of the Vatnajökull glacier. If the eruption occurs in this ice-free area, ash could be released immediately, and thus cause more disruption to air traffic than a subglacial eruption would have.

Experts are undecided on how the crisis may progress. It could go on like this for weeks and die out — or erupt, one professor tweeted. Unfortunately for Icelanders and air passengers, volcanoes are amongst the most unpredictable forces on Earth. As long as the ice continues to rumble, almost anything could happen.

For up-to-the-minute updates on the situation at Bardarbunga, follow experts @subglacial, @gislio, volcano-watcher @johnseach on Twitter. The author is @rwylie9.