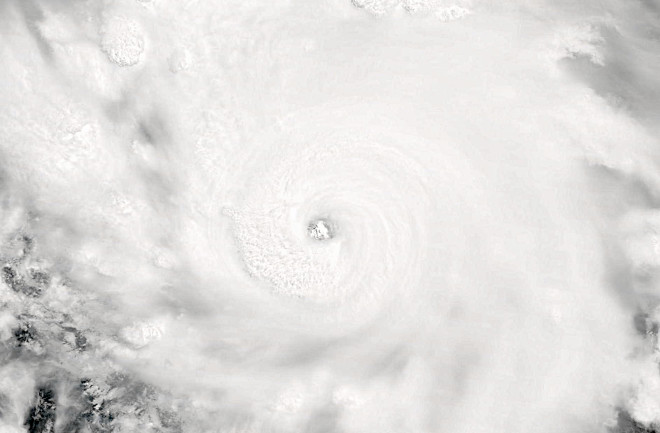 Hurricane Amanda as seen by NASA's Terra satellite on May 25, 2014, just after its peak winds reached 155 miles per hour — making it a strong Category 4 storm. (Source: NASA Worldview.) She's forecast to weaken over the next few days, but on Sunday Amanda entered the record books as the strongest Eastern Pacific hurricane ever seen in the month of May. As of Tuesday morning, Hurricane Amanda's maximum sustained winds were pegged at 120 miles per hour, making it a Category 3 storm. But on Sunday, she was much stronger than that. According to Wunderground.com meteorologist Jeff Masters:

Waters in the tropical Eastern Pacific have been warming recently, increasing the odds of an El Niño.

Amanda became a tropical depression on Thursday, May 22 over relatively warm waters and with low wind shear — conditions that were conducive to rapid strengthening.

From here on out, Amanda is forecast to track north by northwest, gradually weakening as she travels over cooler water and then making an abrupt turn toward the southwest:

Amanda's past and forecast track. The pink symbols show Amanda's forecast position as of Tuesday. (Source: CIMSS) That turn to the southwest means Amanda poses no significant threat to land. But moisture from the storm may stream into Mexico and further north into the Southwestern United States, enhancing thunderstorm activity there. The moisture is needed desperately

. (But not the lightning activity, which could ignite wildfires.)