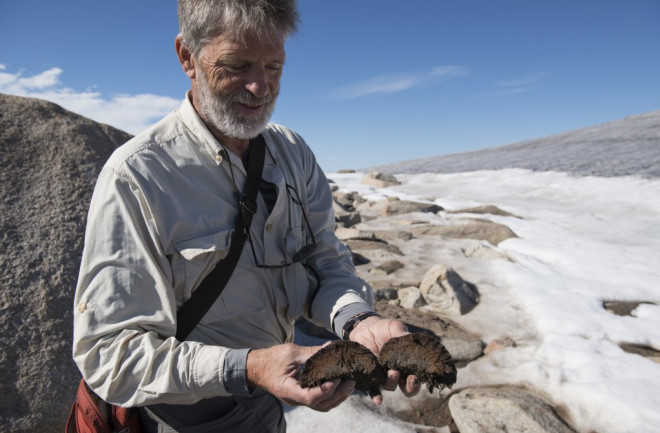 The University of Colorado's Gifford Miller holds samples of moss collected on Baffin Island in the Canadian Arctic. (Photo: Matthew Kennedy, EarthVision Trust.) It has been something of an article of faith among skeptics of humanity's role in global warming: The rise in temperatures observed in recent decades can't be definitively pinned on humans because nature — all by her lonesome — has produced temperatures during the past 11,000 years that were just as warm. The logic: Since nature has produced a warmer Earth during this period without any intervention from us, we can't rule out nature as the cause of the warming observed since the dawn of the industrial age. But now, research involving clumps of moss that died at least 40,000 years ago has debunked this argument. (Whether it will go away is another subject entirely.) The research, published online in Geophysical Research Letters on Oct. 21, shows that summer temperatures in the Canadian Arctic are higher today than they've been in at least 44,000 years, and are likely the warmest they've been in 120,000 years. And there's another sobering finding as well: Climate models may be significantly underestimating how much the Arctic will warm in coming decades. In the interest of full disclosure, I should point out that the lead author of the new research, Gifford Miller, is a colleague of mine here at the University of Colorado. He's a geoscientist. I'm a journalism professor and science journalist. Miller told me about his results last spring, and I've been waiting for his study to be published in a peer-reviewed journal before writing about them. So here's the story of how long-dead clumps of moss helped Miller and his colleagues come up with their new findings...

Southern Baffin Island and the Penny Ice Cap are visible in this image captured by NASA's Aqua satellite on August 11, 2013. (Image: NASA) The story actually starts in the 1980s when Miller landed in a helicopter near a small ice cap in the highlands of Canada's Baffin Island in the Arctic. These bodies of ice are unlike glaciers in that they are small and do not flow like rivers. As a result, they do not crush and grind everything beneath them, including vegetation. Miller recalls that he collected some samples of plants and then flew off. Years later, he found himself teaching freshmen in a large lecture class. He decided that he wanted to update his talk on climate change in the Arctic, which is proceeding faster than elsewhere, thanks to a phenomenon known as "Arctic amplification." So he decided to look for satellite images of the same ice cap he had landed next to all those many years before and use them to illustrate the phenomenon. But there was a problem: He couldn't find the ice cap in the pictures at all. Thanks to warming, it had simply vanished. "There's something about extinction that's more impressive than simple recession," he told me today, speaking of the total disappearance of the ice. Ice caps are actually disappearing all across Baffin Island. In the past 20 years "the warming signal from that region has been just stunning," Miller says (quoted in a press release from the Institute of Arctic and Alpine Research, where he is a fellow.). "All of Baffin Island is melting, and we expect all of the ice caps to eventually disappear, even if there is no additional warming.” The vanishing of the ice cap he noticed in satellite imagery did have one positive effect — it prompted a fascinating research idea: Go to Baffin Island, collect dead vegetation that has been exposed by receding ice caps, and use radiocarbon dating to determine when those plants took their last breath, figuratively speaking, before being covered up by the ice and dying. Here's the logic: Those plants were last alive when they were exposed to the air and sun — in other words, when the ice caps were smaller, and therefore the climate was warmer. So by dating when the plants died, it would be possible to say when the climate became cold enough for the ice cap to expand and cover them up.

Giff Miller's camp on Baffin Island in August of 2013. (Photo: Matthew Kennedy, EarthVision Trust.) Over the course of three summer field seasons, the team collected 365 samples from the edges of about 110 different ice caps in a 1,000 kilometer transect along the highlands of Baffin Island. Of those, the researchers were able to obtain 145 carbon-14 dates, most commonly on rooted clumps of a moss. The radiocarbon dating revealed that the vast majority of the mosses were killed by expansion of ice following the end of a warm period about 5,000 years ago. They were only recently uncovered as the ice retreated under the influence of warming temperatures. This means temperatures now are warmer than they've been for at least that period of time. That was interesting enough. But then came a big surprise. The researchers discovered four small summit ice caps where retreating ice had recently uncovered clumps of moss that dated to at least 44,000 years ago. This moss must have been ice covered in all of the intervening years — until becoming exposed in today's warm climate. And that's not all. It turns out that in all likelihood these moss clumps are even older than that. Much older, in fact. Here's why: Forty-four thousand years is almost at the limit for radiocarbon dating. Past about that point it simply doesn't work very well. So, 44,000 years ago has to be the minimum estimate for when these moss clumps were last alive and exposed to the atmosphere. And it even gets curiouser. Forty-four thousand years ago, the Northern Hemisphere was in the grips of the Ice Age, a profound cold period that began 120,000 years ago. In other words, these moss clumps have probably been locked under ice for 120,000 years, only becoming exposed when today's warming temperatures caused the ice caps to shrink enough to reveal them. These findings show that the recent warmth experienced in the Arctic is "well outside range of any natural variability and can only be explained by increases in greenhouse gases," Miller says. "Natural variability can't be the main contributor." The likely culprit is the increasing concentrations of heat-trapping greenhouse gases in the atmosphere caused by fossil-fuel burning and other human activities.

Giff Miller hikes the highlands of Baffin Island in August of 2013. (Photo: Matthew Kennedy, EarthVision Trust.) And there's even more to the story. The mosses also helped the research team to reconstruct the evolution of the snowline around Baffin Island ice caps. From this they were able, in turn, to determine how temperatures have changed over the course of many millennia It has long been known that prior to the current warming, the Arctic has been cooling for most of the past 5,000 years. The cause: shifts in the amount of solar energy reaching Earth brought about by natural changes in our planet's orientation relative to the sun. Scientists have used computer models to determine just how much cooling this phenomenon should have caused. But the data from Miller's research show that the actual cooling was about twice the response predicted by climate models. So here's the rub: Those same models are used to predict the future course of climate change. Based on the new results, Miller says the models probably are predicting slower and less intense warming in the Arctic than may be in store. Why is that? The same climatic feedback mechanisms that would tend to enhance cooling in the Arctic would also operate in reverse and enhance warming. If you've made it all the way through to this point, you may be wondering whether clumps of moss on a single island in the Canadian Arctic are reflective of climate shifts throughout the Arctic. Miller has been wondering about that too, so he and his team have been collecting plants from sites in Iceland, Greenland and Svalbard. Those results haven't been published yet, so stay tuned. But my educated guess is that they are going to show a similar picture.