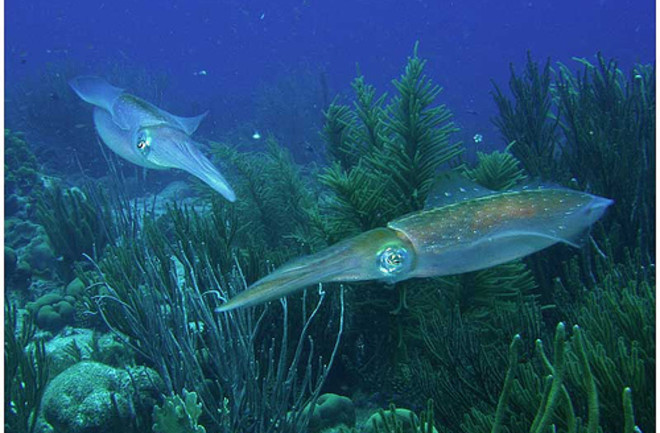 “Massive acoustic trauma.” It sounds like an ’80s metal band, but according to scientists at the Technical University of Catalonia in Spain, it’s what happens to squid and other cephalopods when they are exposed to sounds similar to boat noise. After exposing 87 cephalopods to low-volume, low-frequency noises for two hours, the researchers found damaged nerves, lesions, and other trauma in the creatures’ hearing organs. There are some holes in the team’s methods (see below), but if the findings hold, squid will be added to the long list of marine animals (including whales, dolphins, and crustaceans) endangered by human-made noise in the oceans. What’s the Context:

Not So Fast: According to scientists interviewed byScienceInsider, the experiment has some flaws. The researchers don’t report much quantitative data, and they didn’t keep their control cephalopods in aquariums as they did with the sound-exposed cephalopods, which “leaves open the possibility that captivity, not noise, somehow injured the experimental animals,” says sensory physiologist Peter Madsen.

The new paper is "a good first step" in determining whether ocean noise from humans harms cephalopods, adds T. Aran Mooney, a marine biologist at Woods Hole Oceanographic Institution in Massachusetts...But he questions how the researchers measured the animals' exposure to noise. "If the National Marine Fisheries Service wanted to make a regulation based on this paper, they wouldn't be able to do it," he says. (ScienceInsider)