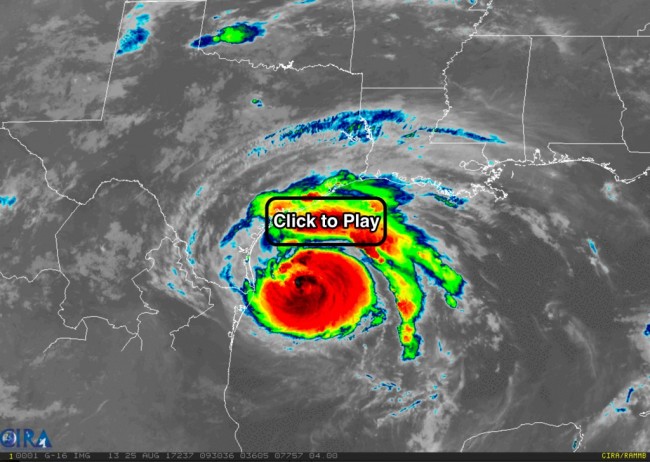 An animation of infrared imagery from the GOES-16 weather satellite shows the evolution of Hurricane Harvey between Aug. 25 and 28 2017. (Note: The animation may take awhile to fully load and play smoothly. Source: RAMMB/CIRA) The North Atlantic hurricane season last year was extraordinary for a number reasons, but none more memorable than these: Irma, Maria and Harvey. These three hurricanes brought enormous devastation to portions of the continental United States, the Caribbean islands, and other parts of the tropical Atlantic. Harvey alone produced more than 100 trillion kilograms of rain, causing cataclysmic flooding along the Gulf Coast. Now, a new study links Harvey's devastation to climate change resulting from human activities. As the summer of 2017 began, the amount of heat stored in the world's oceans was the highest ever recorded. That was also true within the Gulf of Mexico, where Harvey prowled, according to the study, appearing in the journal Earth's Future.All that heat pumped Harvey up with enormous amounts of moisture — making it one of the wettest storm systems in United States history. The highest rainfall amount recorded on land during Harvey totaled 48.20 inches at a rain gauge on Clear Creek near Houston. That ranked as the highest rainfall amount in a single storm for any place in the continental United States, according to NOAA. And by one estimate, 1,300 square miles of Harris County's 1,800 square miles was inundated with 1.5 feet of water from Harvey. Shortly after Harvey hit, I created this animation for a story intended to help readers visualize the full extent of the flooding:

False-color before and after images acquired by NASA's Terra satellite and centering on Houston show dramatic flooding from Hurricane Harvey. One image was captured on May 2, before Harvey; the other on Aug. 31, 2017, afterward. (Images: NASA Worldview. Animation: Tom Yulsman) Thanks to the new study, these impacts can now be attributed in no small measure to the effect we are having on our planet's climate system. The authors, led by Kevin Trenberth of the National Center for Atmospheric Research, say their new research has implications for hurricanes generally. "While hurricanes occur naturally, human-caused climate change is supercharging them and exacerbating the risk of major damage," they write. Hurricane Harvey offered an excellent opportunity to examine the "supercharging" phenomenon because it traveled by itself over relatively undisturbed water in the Gulf of Mexico. This meant there were fewer complicating factors for the researchers to contend with, including the impact of other storms. As a result, Trenberth and his colleagues could gain a detailed picture of how Harvey feasted on the record-breaking heat in the Gulf of Mexico. To do so, they used temperature data collected by Argo, a network of autonomous floats in the Gulf. They also used satellite-derived precipitation data provided by NASA's Global Precipitation Measurement mission. These data revealed a direct link between the moisture evaporating from the warm surface waters of the Gulf of Mexico as Harvey passed overhead, and the precipitation that subsequently fell on land. “We show, for the first time, that the volume of rain over land corresponds to the amount of water evaporated from the unusually warm ocean,” Trenberth and his colleagues write in their study. Here's how it works: As a hurricane like Harvey charges toward the coast, it violently stirs up the sea surface, helping water to evaporate. And the more heat energy that's available, the more water that will evaporate. That moisture rises and converges into the storm, and then much of it precipitates, falling out as rain. As Hurricane Harvey moved across the Gulf, the scientists found an expected signature: Thanks to all of the energy that went into evaporating water from the sea surface, a cool wake was left behind the storm. But measurements showed that in this case, the wake wasn't as cool as it might have been. Here's why: The upper reaches of the Gulf contained such a staggering amount of energy that as the storm cooled the surface, heat from below simply welled up, rewarming the surface waters. And this, in turn, continued to help supercharge the storm. 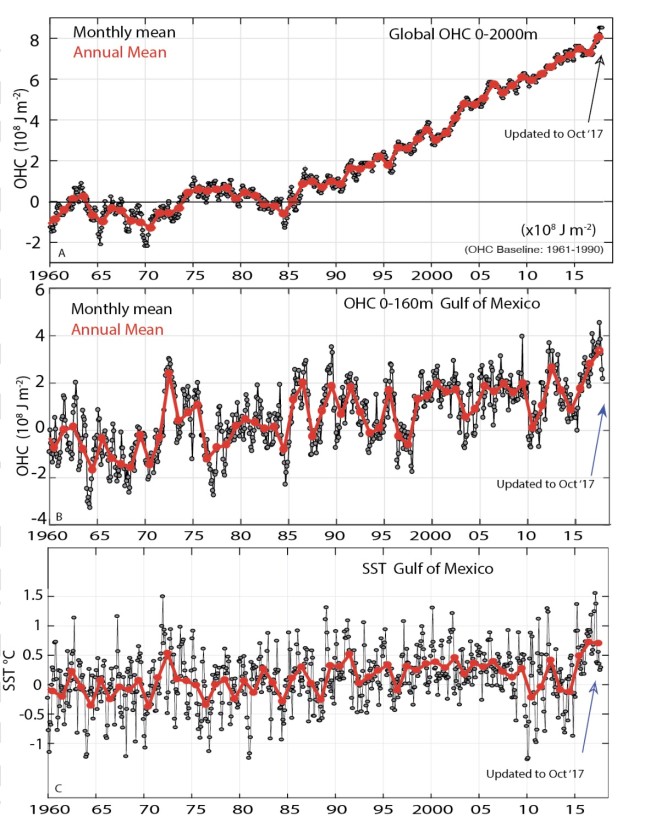 The top graph shows that the heat content of the world's oceans has been rising. Black indicates the monthly ocean heat content anomaly, and red shows the annual anomaly. The middle graph shows a rising trend in ocean heat content for the top 160 meters of the Gulf of Mexico. The bottom graph reveals a rising trend in sea surface temperatures in the Gulf of Mexico. For each graph, the last month shown is October 2017 and the last red dot is for the period Jan-Oct 2017. The baseline period is 1961-90. (Source: Earth’s Future, a journal of the American Geophysical Union) The oceans have absorbed the vast majority of the heat that has built up in our planet's climate system due to our emissions of carbon dioxide and other greenhouse gases — some 92 percent in total, in fact. Two-thirds of that excess has been absorbed by the upper ocean. Research published by Trenberth and colleagues last year showed that the upper ocean warmed four times faster between 1992 and 2015 than it did between 1960 and 1990. These percentages don't really give us a concrete idea of just how much heat is going in to the world's oceans. So this comparison may help clarify that: The increase in ocean heat content observed since 1992 in just the upper 2,000 meters of the ocean is equivalent to 2,000 times the electricity generated by U.S. utility companies over the ten years ending in 2016. What goes into the ocean doesn't all stay in the ocean. That's literally so, because heat absorbed in the ocean is slowly released back into the atmosphere. And it's figuratively so for a number of reasons. Ocean waters are expanding as they warm, causing sea level to rise. Warmer seawater also is helping to melt ice shelves and glaciers, speeding the flow of ice into the oceans from Greenland's and Antarctica's massive ice sheets. This too helps raise sea level. And as Trenberth and his colleagues have shown, warming ocean waters are supercharging hurricanes, leading to more damage on land than would otherwise occur. With that in mind, we should be planning for stronger storms, with an eye toward making coastal communities more resilient through "better building codes, flood protection, and water management," Trenberth says. We should also be preparing to deal better with loss of electrical supplies to communities, and for evacuating communities. But we didn't really need the new study to tell us that. As Trenberth and his colleagues put it in their paper:

Houston has been beset with three 500-year floods in three years prior to Harvey, and Miami regularly experiences “sunny day” flooding with high tides. Why was there reportedly only 1 in 6 with flood insurance in the Houston area and Florida? Why have various flood mitigation measures not been enacted? The hurricanes of the summer of 2017 in the Atlantic are yet another example of how disaster risk management and climate adaptation, while challenging for multiple reasons, remain critically important.