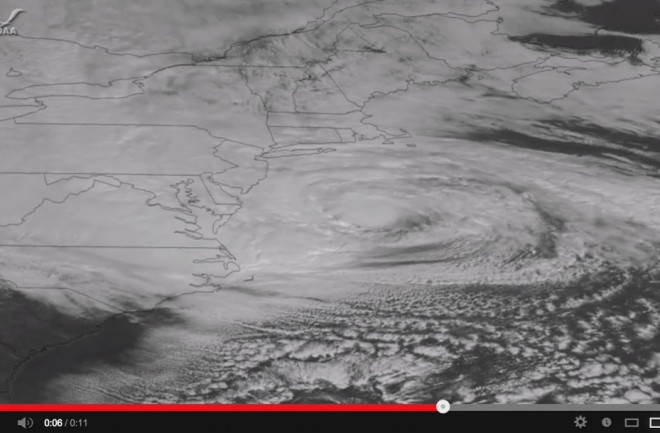 A screenshot from an animation of Hurricane Sandy based on images from the GOES-14 satellite, acquired October 29, 2012. (Click to watch.) The animation reveals the storm's detailed cloud structures as it approached the U.S. coastline. (Source: NOAA Environmental Visualization Laboratory.) Figuring out what caused an extreme weather event like Hurricane Sandy, seen in the animation of satellite images above, can be something like trying to determine what caused a car wreck. In the case of a wreck, was it the fact that the driver had consumed alcohol? Or that it was a dark and stormy night and the roads were very slick? In the case of an extreme weather event, bad stuff happens all by itself, just like dark and stormy nights. So an event like Hurricane Sandy can occur and cause havoc just because of natural variability. Yet, just as driving drunk can help determine the outcome of driving on a slick road in the dark, human-caused climate change can make the outcome of a natural event more extreme. Teasing apart these details and saying something meaningful and accurate about human influences on extreme weather events has been one of the great challenges facing scientists. Now, 19 studies by 18 research teams gathered together in a special issue of the Bulletin of the American Meteorological Society show that scientists are getting better at that detective work. (In their conclusion, btw, the researchers use a similar car crash analogy as the one above to explain the challenges they face.) The headline conclusion of the report is that we humans contributed to half of 12 extreme weather and climate events around the world in 2012 examined by the research teams. These include spring and summer heat waves in the United States, the inundation from Hurricane Sandy's storm surge, the record low Arctic sea ice extent in 2012, and some extreme rainfall events. But there is much, much more to the report. So in coming days, I'll be going through it in detail and sharing what I've learned, along with comments from scientists. I hope to have the first one posted before the end of the day, so please check back.