Huge Piece of Japanese Dock, Broken off by Tsunami, Washes Up In Oregon 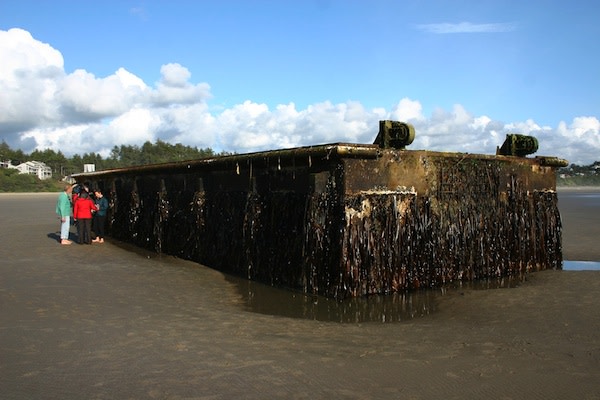 The tsunami that slammed into Japan in March 2011 ripped this dock from its rightful home in Misawa and took it on a 15-month voyage to Agate Beach, Oregon, where it arrive this week. A metal plaque with Japanese writing helped confirm its origin. The dock isn't radioactive, though it may have borne a different danger: invasive species. Last year’s tsunami caused massive devastation in Japan from the coast to up to three miles inland. And as the water receded, it dragged 5 million tons of debris

with it into the ocean. Most of the wreckage sank near the coast of Japan, but some 1.5 million tons drifted out to sea under the influence of winds and currents, initially forming a debris field detectable by satellites and then dispersing. Most of the wreckage is still at sea, but items ranging from an empty ship to a Harley-Davidson have been washed up on Pacific Northwest shores since this past winter. 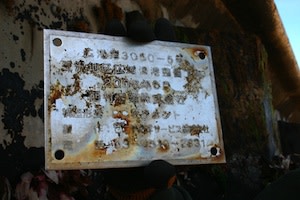 The dock that washed up in Oregon bore this metal plaque with Japanese writing.

But the dock’s size, 66 feet long with a weight greater than 180 tons (on the same order of magnitude as a blue whale), sets it apart from smaller pieces of debris. Items as large as the dock could damage ships, but the greater danger is small: the living creatures, from algae to starfish, that hitch rides on pieces of wreckage to reach new habitats. For example, the dock carried Japanese acorn barnacles, mussels, and the known invasive species wakame

, a type of seaweed. The Oregon Department of Fish and Wildlife is currently organizing volunteers to remove organisms from the dock and the beach. But getting rid of the dock itself will be much more challenging than detaching its passengers. [via BBC News

] Images courtesy of the Oregon Parks and Recreation Department