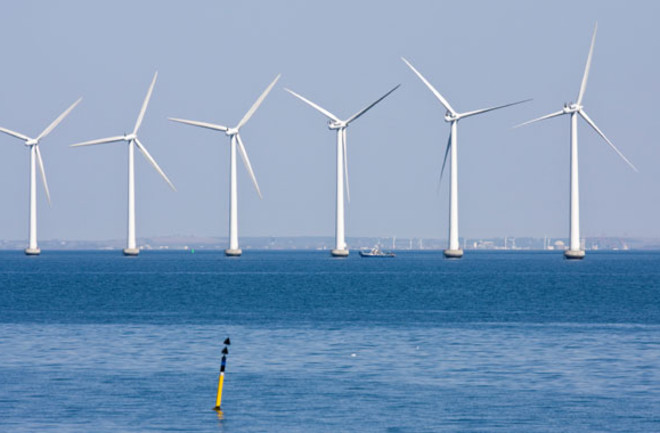 When it comes to generating clean energy, the strong offshore winds that blow in from the ocean are a great source. But while these sea breezes are often stronger than land winds, they're not consistent; instead their force tends to ebb and flow like the tides. Wind turbines that use offshore winds to produce energy can therefore have a tough time maintaining a steady supply of power, but now scientists from the University of Delaware have proposed a novel idea on how to keep the power supply steady. In a new paper published in the Proceedings of the National Academy of Sciences, Willet Kempton and his team suggest that by connecting offshore wind farms in a long network running along the entire Eastern Seaboard, power fluctuations could be cut down,

as electricity from interconnected farms would be easier to manage and more valuable than from wind at a single location [BusinessWeek].

The researchers suggest that by creating a 1,550-mile-long network of wind turbines, the network could provide power from Massachusetts to North Carolina. Kempton says linking the turbines would also help eliminate the possibility of a complete power outage should wind speeds drop in any one location. If the wind drops in North Carolina, say, power could be rerouted from somewhere else in the network where the winds are blowing strongly, scientists explain.

The concept is simple: If you spread out wind stations far enough, each one will experience a different weather pattern. So it’s very unlikely that a slackening of the wind would affect all stations at once. The result is steadier power [Wired.com].

Not once during the five year period studied did the overall power output drop to zero. “We took an intermittent resource and made it not intermittent anymore,” Kempton said [Wired.com].

Though the United States is the world's largest producer of wind power, no commercial offshore wind farms are up and running yet here; Kempton's research may provide support for the various offshore wind projects in the planning stages along the Atlantic coast. Mark Jacobson, a civil and environmental engineer at Standford University comments:

“The technology’s there, the materials are there, we have the willpower to reduce carbon emissions, we have a reliable power supply that doesn’t lead to fuel shortage.... The next step is really to start implementing this on a large scale” [Wired.com].

However, installing cables like those Kempton used in his study to hypothetically connect the different turbines could cost as much as $1.4 billion. Related Content: DISCOVER: High-Flying Windmills Blow Away Their Ground-Based Cousins 80beats: Windmills on NYC Skyscrapers Sound Cool, but Wouldn't Work 80beats: Wind Turbines Could Theoretically Power the Entire World, and Then Some 80beats: Will New York City Harness Wind Power?Image: iStockphoto