Huge amounts of heat are available to fuel Atlantic hurricanes, yet nothing's happening. What's going on?

These animations and images help provide the answer

An animation of satellite imagery shows dry and dusty air streaming out over the Atlantic from the Sahara Desert. One image, acquired by the Suomi NPP satellite, shows the scene in natural color on July 20, 2016. Note the dusty scrim streaming out over the ocean from Africa's west coast. The other, based on data from NASA's Terra and Aqua satellites, highlights dust in tones of yellow, orange and red. Dry and dusty air tends to inhibit the development of Atlantic hurricanes through a number of mechanisms. (Images: NASA Worldview. Animation: Tom Yulsman) The Atlantic hurricane season started with a bang, but since then? Nada.

Warm colors show areas of high ocean heat content in July. (Source: NOAA/AOML) This despite a huge amount of oceanic heat available to feed these meteorological beasts, as the animation at right shows. (Click to expand it.) The first hurricane this year, Alex, swirled in the North Atlantic in mid January. That was shockingly early: Since record keeping began, only two other hurricanes are known to have formed in the Atlantic during January, according to Weather Underground's Bob Henson. Following Alex, there have been three other named storms. The last one was Tropical Storm Danielle, which dissipated on June 21. The broadest picture of the dearth of Atlantic hurricanes since then looks like this: When tropical cyclone activity is high in the Pacific — as it has been recently — things tend to remain calm in the Atlantic. That's because the rising air that occurs over the eastern Pacific's stormy areas results in sinking air over the Atlantic. And sinking air is very unfriendly to Atlantic hurricanes. Beyond that, several factors associated with a phenomenon known as the Saharan Air Layer, or SAL, also inhibit formation of Atlantic hurricanes. The SAL is a region of very dry and very dusty air that forms over the Sahara Desert between about 5,000 and 20,000 feet, and then moves westward over the tropical Atlantic. You can see it in the animation at the top of this post, as well as in this one based on data from the GOES and Meteosat satellites covering the period between July 19th and 21st, 2016: https://youtu.be/Tm7GQCppXWs Here is a closer, natural-color view, as seen by the Suomi NPP satellite on July 20th: 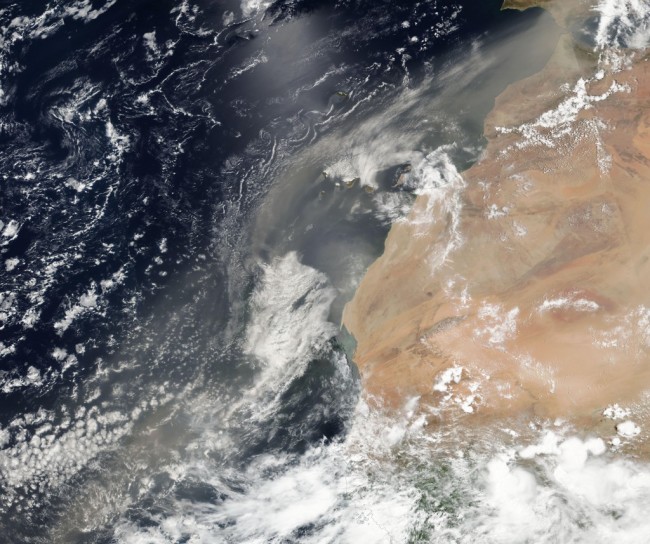 Plumes of dust stream out over the Atlantic in this image captured by the Suomi NPP satellite on July 20, 2016. Click on the image for a larger view, and then click on it again to zoom in close. (Source: NASA Worldview) Pretty much by definition, Saharan air is about as dry as dry gets. And that is exactly the opposite of what you need to form a hurricane. This animation shows how atmospheric water vapor has evolved over the Atlantic since the beginning of July: 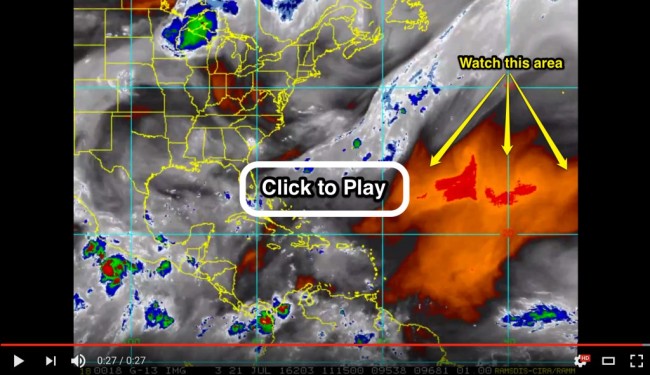 Screenshot of an animation based on infrared data from the GOES-East satellite depicts water vapor in the atmosphere. (Click on the screenshot to watch the animation.) Orange and red tones are indicative of dry atmospheric conditions, which are unfriendly to tropical cyclones. (Source: RAMMB/CIRA) As the animation progresses from July 1 through July 21, 2016, note the development of the big red and orange blob over the central tropical Atlantic. This is an extension of the Saharan Air Layer. It reaches almost all the way to the Caribbean Islands. The SAL inhibits cyclone formation in other ways as well. Since it is relatively light and buoyant, it rides over the cooler, moister air directly above the ocean water as it moves out into the Atlantic. This inversion of the normal state of affairs (warmer air below and cooler above) stabilizes the atmosphere. That's because the anomalous warm layer of air aloft acts like a cap, preventing moist air below it from rising high and leading to storm formation. The Saharan Air Layer also is associated with low to mid-level winds that can dramatically increase wind shear. And wind shear is another enemy of tropical cyclones. The dust itself has its own impact. During the day, it absorbs solar radiation and heats up. This in turn can help to strengthen the temperature inversion. (For more information on the impact of the Saharan Air Layer on the development of Atlantic tropical cyclones, see this detailed paper from the American Meteorological Society.) 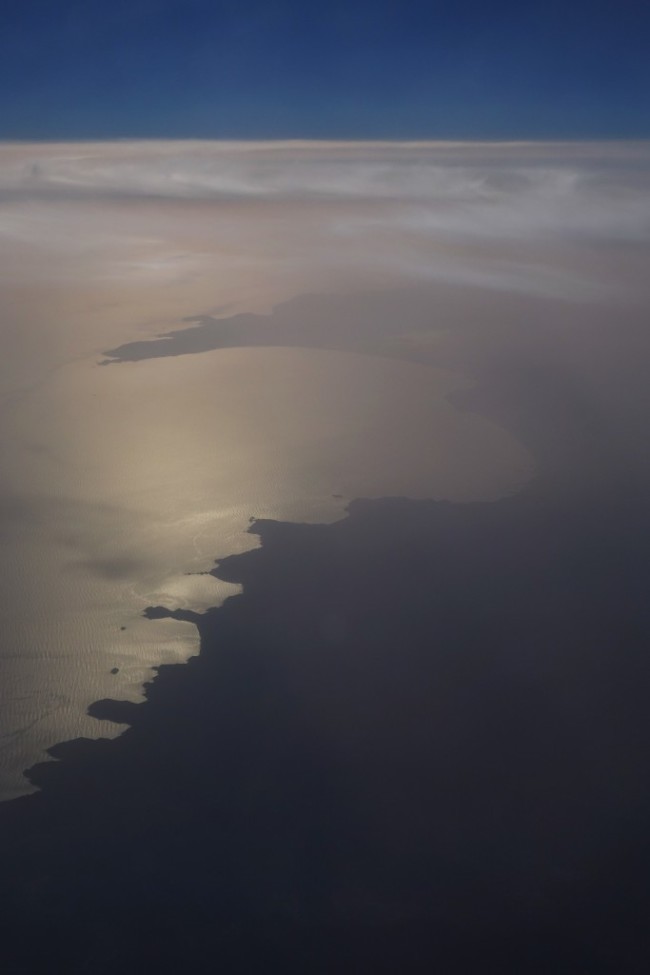 Sandstorm over the Algerian coast, as seen from a commercial airline flight on July 4, 2016. (Photograph: ©Tom Yulsman) Winds have been whipping up large clouds of dust over the Sahara throughout July. The photograph above shows what it looked like out an airplane window while I was flying over the Algerian coast near the city of Skikda on a July 4th. (I was headed for Amsterdam on a KLM flight from Cape Town, South Africa.) Just as conditions in Africa can help prevent hurricanes from forming in the Atlantic, so too can they help spawn the monster storms. This happens when waves of moist, low-pressure air start moving off the African continent and out into the Atlantic. These African tropical waves, as they are known, form the seeds around which hurricanes can grow. No such seeds are expected to be sown in the next five days, according to the National Hurricane Center. But beyond that, the eastern Pacific cyclone activity may well settle down some. And Africa could begin to throw tropical waves out into the Atlantic. In that case, keep your eyes on the huge amount of heat energy available to fuel storms there. That heat could turn the 2016 Atlantic hurricane season around dramatically.