How to Turn a Papasan Chair Into a Solar Cooker 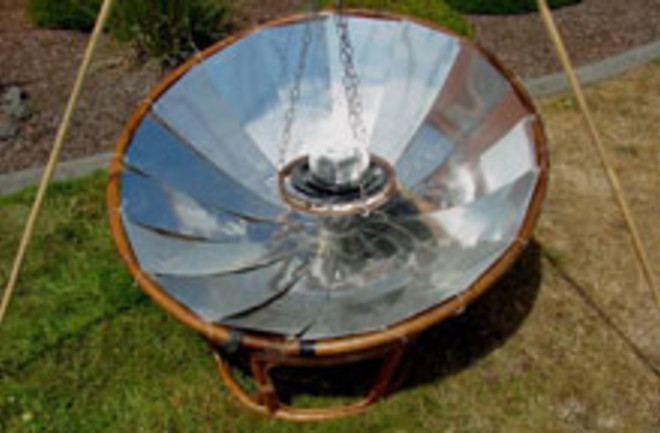 Remember those cookies that were baked on the dashboard of a car? Well, now someone who's extra-crafty has upped the ante by converting a papasan chair into a solar cooker. The apparatus is made of a reflective cone that consists of triangles of anodized aluminum bolted together in the center, which fits into the frame of the chair. There's even a bamboo tripod to hang the food or water that the reflective cone will cook. This idea comes from Appropedia, a site dedicated to sharing ideas and knowledge about sustainability. According to the author:

My hope was that, in the spirit of synergy, the whole would be greater than the sum of the parts and that people may find the idea of owning a solar cooker more practical if they can also sit and read a book in it when its not in use. Compared to the traditional mono-functional Parabolic Solar Cooker, this project serves as a chair when not in use, which saves space and is less of a fire hazard than the traditional Parabolic Solar Cooker.

The site has a DIY guide to crafting your very own papasan chair-solar cooker. Sounds pretty sweet... just be sure not to sit on the hot aluminum cone. Related Content: Discoblog: How to Make Solar Chocolate Chip Cookies on Your Car Dashboard Discoblog: Cooking in Space: Slow, Mediocre, and Dangerous Discoblog: The World’s First "All Synthetic" Meal Graces a Five-Star Table Image: Bart Orlando