How to Make Acres of Fake Snow 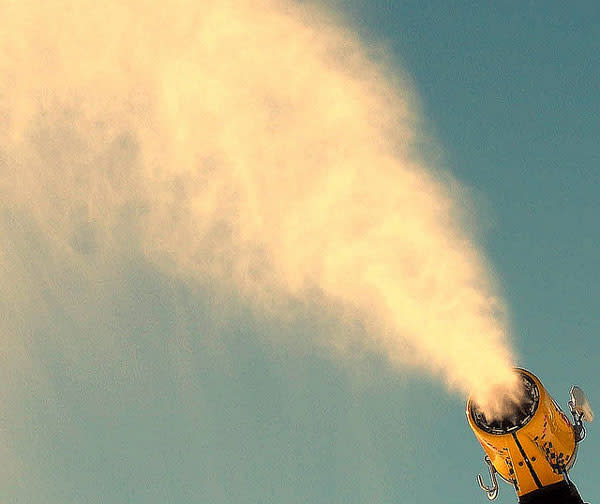 When winter doesn't hold up its end of the snow bargain (we're looking at you, this winter

), ski areas often make their own, using devices like the one above and plenty of water. A short piece on the New York Times site

describes the moment in 1950 when modern snowmaking was invented, when Wayne Pierce, an employee at Mohawk Mountain in Connecticut, improved upon the owner's plan of trucking in tons of shredded ice:

He figured that a drop of water, propelled through below-freezing air, would turn into a snowflake, [colleague Arthur] Hunt recalled. Along with Dave Richey, their partner in a ski factory, they slapped together a spray-gun nozzle, a 10-horsepower compressor and a garden hose into something of a D.I.Y. snow gun. They experimented with it all night. “By morning,” Hunt wrote, “we had a 20-inch pile of snow over a diameter of 20 feet.” The contraption was later used at Mohawk Mountain.

Snowmaking has since developed quite a bit. While early attempts at snowmaking used just water, these days a special mixture of dirt and water is used to get natural freezing: as we've written before, ice crystals usually need a particle to coalesce around, which can be a bit of dirt or even bacteria floating in the atmosphere

. These particles are called nucleators. In fact, with the right nucleators added in, ski areas don't even have to wait until temperatures get really cold to start snowmaking. The air temperature has to get down to 18 °F before snowmaking can take place, using plain old water. But with a few other things added in, Chemical and Engineering News notes

When the temperature isn't quite cold enough--above about –5 °C (23 °F)--snowmakers need little helpers in the form of seed materials added to the water to generate nucleation sites. Silver iodide, kaolin, soaps and detergents, and fungi or lichens are among the materials that have been used. Currently, the most popular additive is Snomax, a freeze-dried protein powder sold by York Snow, Victor, N.Y. Snomax is derived from Pseudomonas syringae, a common bacterium found on grasses, trees, and vegetable crops. In the 1970s, plant pathologists studying the frost sensitivity of corn plants at the University of Wisconsin, Madison, discovered that the bacteria were responsible for initializing ice crystallization.

As cool as the chemistry behind it is, though, snowmaking is not really a replacement for getting snow the natural way, at least not as far as the environmental impact is concerned. As you can imagine, making that much snow takes a huge amount of water and energy, and it's expensive: an acre of foot-deep snow can cost up to $2,000, the NYT reports

. One has to wonder, where do ski resorts pull that water from, and how does intense snowmaking activity, as must be happening in the Northeastern US this year, affect the local water table?