How Do You Prove a Bear Guilty of Murder? 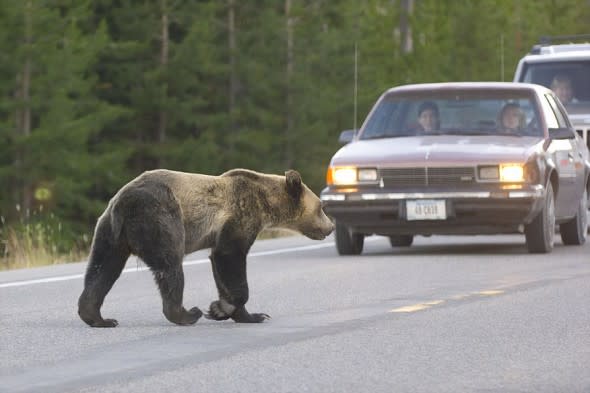 A grizzly bear crossing the street in Yellowstone.

You can't get inside the head of a grizzly bear, yet that's exactly what bear managers try to do every time a wild animal attacks a hiker. A bear acting out of self-defense is allowed to live, but a bear is attacking and eating humans must be killed. That's the rules of our grizzly bear justice system. Last summer, a female bear called the Wapiti sow was euthanized after bear managers ruled her responsible for the only two grizzly bear-related deaths in Yellowstone of the past 25 years. The first mauling was probably out of self-defense but the second, well, the only evidence pointing toward her was circumstantial. In the tradition of true crime, Jessica Grose at Slate has written a riveting piece about the Wapiti sow case

. At the heart of the issue is what happens when humans and bears are forced to confront each other:

It occurs to me later that this moment perfectly illustrates what [bear manager] Chris Servheen calls "the Park Service paradox." City slickers like me go to Yellowstone to feel humbled by nature, by its sheer beauty and its uncontrollability—that’s part of the purpose of the Park System, it’s there for the enjoyment of the people. But the park is ultimately a human creation: Its boundaries are built and monitored by the government, and the rangers are responsible for keeping its 3 million yearly visitors safe...

Applying a human-constructed justice system to grizzly bears tries to reconcile this paradox, but it will never be a perfect fix. There are always going to be aspects of grizzly bear behavior that are inexplicable, and that’s what makes them awe-inspiring. That’s also what makes a bear manager’s job so difficult.

For a behind-the-scenes look at this article, also check out The Awl's interview with Jessica Grose. Image via Flickr / xoque