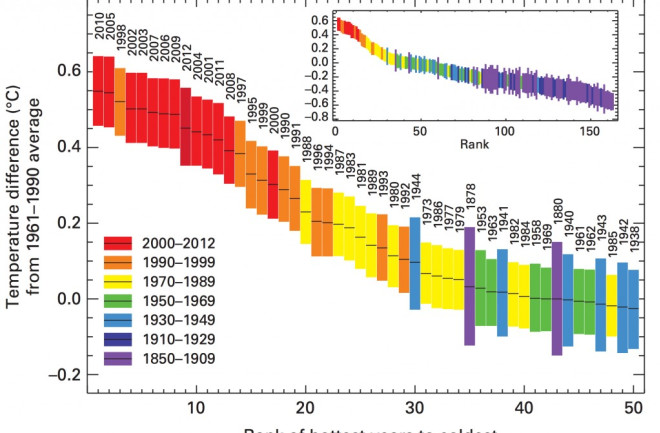 The 50 hottest years on record. (Source: World Meteorological Organization) I plucked this graphic from a report just released by the World Meteorological Organization, summarizing the status of the global climate in 2012. It shows the 50 hottest years on record, and I find it to be a new and interesting way to depict the progress of global warming over the decades. The vertical axis of the graph shows how temperature for a given year departed from the long-term average. And the color-coding of the bars is a way of depicting the distribution of the temperature records on a decadal timescale. (The size of each bar, by the way, is an indication of the uncertainty inherent in each record. The longer the bar, the greater the uncertainty.) The take-home message of the graph can be seen in the red and orange bars: Of the 20 hottest years on record, 19 have occurred since 1990. And of the 10 hottest, nine have occurred since 2000. I suspect the graph will be something of a climate-politics Rorschach test. Those who accept the scientific consensus that humans are having a significant impact on the climate system, as I do, will see confirmation of global warming here. But those who are skeptical may view it as a way of obscuring the fact that warming has slowed since the turn of the century, as this graph makes evident:

Global temperature change from 1880 to the present. (Image: NASA Goddard Institute for Space Studies) The slowdown in warming has occurred despite the fact that the concentration of carbon dioxide in the atmosphere has kept rising. What's up with that? Physics would seem to dictate that with more greenhouse gases in the atmosphere, heat has to be building up somewhere. But where? My friend and colleague over at Climate Central, Michael Lemonick, had a good explanation of it back in March:

The answer, according to a new paper in Geophysical Research Letters, is that a lot of it is being stored in the deep ocean, more than a half-mile down. “We normally think about global warming as what we experience on the Earth's surface,” said co-author Kevin Trenberth, of the National Center for Atmospheric Research, in an interview. If extra heat is temporarily stored elsewhere thanks to natural climate variations, we won't necessarily notice it.

Until that heat starts coming back out.