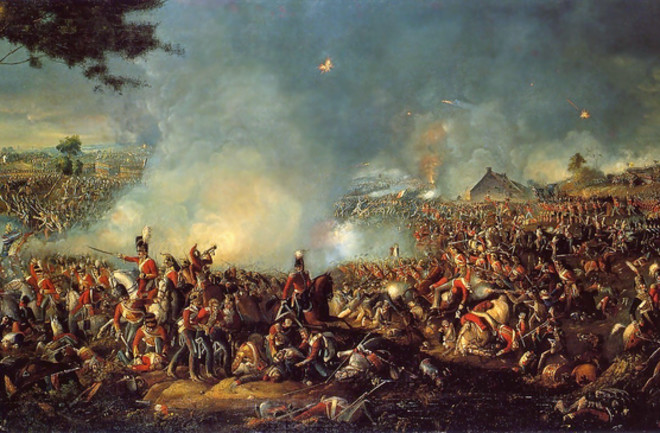 The Battle of Waterloo, 1815. An analysis of 60 studies on climate change and its effects on human conflict shows that upswings in temperature and rainfall create measurable increases in violence in societies around the world, both today and thousands of years ago. The study is the most extensive examination yet of the plethora of papers on climate change and its effects on society. The challenge in creating a unified picture of climate's effects on violence has been that the work spans all kinds of disciplines, from archaeology to history to economic theory, and methodology varies greatly between studies. Researchers at the University of California, Berkeley and Princeton analyzed the most rigorous studies in the field, selecting only those where clear causation of climate to violence had been proven. The team looked at three different kinds of conflict: individual violence such as murder, rape and assault; group-on-group violence such as civil war, ethnic violence and land disputes; and political breakdown, such as the collapse of a civilization. They examined research that ranged from ancient societies in Mexico, Cambodia and China clear up to our modern world--including Hindu-Muslim riots in India, political violence from 1989 to 2004 in Kenya, and rape in the United States.

A yardstick for climate change

In analyzing a wide range of locations, the researchers had to standardize their measurements. To do this they used the statistical concept of standard deviations. Roughly speaking, one standard deviation of climate is the distance from average that is the "norm." So, for instance, climate in Madison, Wis., has a standard deviation of 6.8° F, meaning that temperatures on most days will be within 6.8° of the average. Places with more climate variability will have larger standard deviations than places that are roughly the same climate all year round. Likewise the authors took into account rainfall. Places with monsoon seasons will have a larger standard deviation in rainfall; places with roughly even rainfall across the year will be lower. When the authors compared the incidence of violent events with the deviations in temperature and rainfall, they found "a remarkable convergence." All three types of conflict---interpersonal, group-on-group and political---show large responses to changes in climate, with the effect on group-on-group conflict being the most pronounced in percentage terms. For every one standard deviation increase in temperature or rainfall, the frequency of individual violence rose 4 percent, and the frequency of group conflicts rose 14 percent. These increases in temperatures and rainfall extremes had an effect regardless of the historical period or location, the researchers report today in Science.

The results have a dire undertone given current climate change projections, which predict that populated areas of the globe will see a temperature rise equivalent to 2-4 standard deviations by mid-century. Thus, the scientists write, "anthropogenic climate change has the potential to substantially increase conflict around the world." This potential has been acknowledged by academics in the past. The resource limitations and new resource opportunities of climate change, coupled with migration and climate refugees, are rife with potential conflict. But this study is the first to quantify what those effects are. Still, while the team's analysis established a direct connection between variations in climate and an uptick in human conflict, they don't know why this happens. "We're in the same position that medical researchers were in during the 1930s," said lead author Solomon Hsiang. "They could find clear statistical evidence that smoking tobacco was a proximate cause of lung cancer, but they couldn't explain why until many years later."