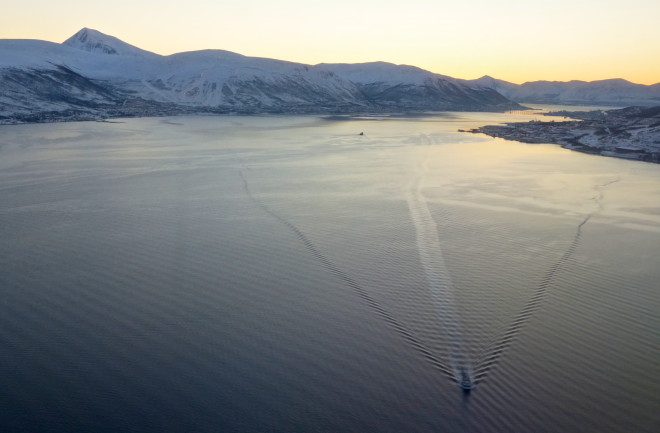 A boat cruises through Tromsøysundet, a strait separating the island of Tromsøya from the mainland of Norway, as seen from an airplane on approach to the city of Tromsø. (Photograph: © Tom Yulsman) On a flight yesterday from Kirkenes to Tromsø, Norway, I kept my face plastered to the window as we made our approach to the airport. Serrated peaks draped in winter snow soared above the fjords as we descended. And then I spotted this beautiful example of simple physics, hiding in plain sight right below us: a spectacle of interfering wave patterns created by the interaction of swells in the Tromsøysundet strait and the wake of the boat cruising toward my camera. Interference occurs when waves, be they water waves, light waves or sound waves, from two or more sources interact. In some places, the waves can interfere with each other in a constructive way, meaning they add to each other. In this case, the resulting waves are of greater size that the original ones. In other places, the waves interfere with each other in a destructive way, meaning they subtract from each other, resulting in waves that are smaller than their parents.

A closeup of a portion of the image at the top of the post shows swells interacting with the wake of the boat. (Photograph: © Tom Yulsman) Zooming in closer, you can see this phenomenon playing out more clearly. (I've also converted the image to black and white, to accentuate the wave patterns.) As the boat moves through the water it is leaving behind a classic V-shaped wake. The arms of the V are made up of feather-like waves splaying outward. And behind the boat within the arms of the V are transverse waves. This overall pattern is created by a complex series of interferences, and it has been well understood since Lord Kelvin worked it out mathematically in 1887.

Click for animation. But I think I'm seeing more going on here. Look at the transverse waves within the arms of the V. They don't stretch in unbroken lines across the space. There appear to be gaps in places, repeating in a fairly regular pattern. If I'm not mistaken, ocean swells running diagonally across the image have caused destructive interference here. For a terrific animation that shows destructive interference similar to what may be going on behind the boat, click on the image at right. I didn't realize when I came to Norway that I'd be posting about physics. I'm here to attend the Arctic Frontiers conference in Tromsø and report on climate issues in the high north. But this was so compelling I thought I would just share it. Stay tuned for more from Norway. I'm here through the week.