Here's Why Gasoline Prices are Plunging 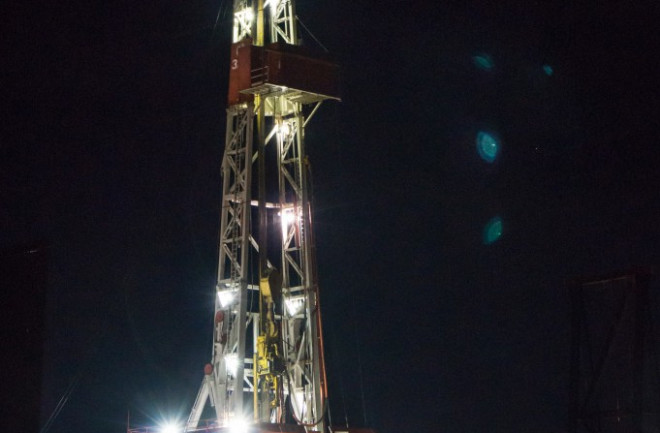 A drilling rig in Weld County, Colorado, at night. Photographed on Jan. 5, 2014. (© Tom Yulsman) Pic of the Day If you want to understand why gasoline prices have plummeted in recent weeks — and why gasoline futures today plunged to a new low — look no further than the photo above. It's a drilling rig in Weld County, Colorado, out on the high plains north of Denver. I spotted it when I was driving to the airport the other day to pick up my daughter. It was really big and lit up like a Christmas tree. So it was impossible to miss. Both oil and gas production have surged in recent years in Weld County — and particularly oil. Between 2010 and 2013, oil production in the county almost tripled, growing from 17,739,180 barrels to 49,495,407 barrels. A little more than 80 percent of Colorado's crude production comes from this one county. And Colorado overall contributes a lot to U.S. crude production overall. According to the U.S. Energy Information Agency:

Colorado's crude oil production has been rising with the increased use of horizontal drilling and hydraulic fracturing technologies, and the state is supplying about 1 of every 50 barrels of U.S. output. Two of the 100 largest U.S. oil fields are in the state, more areas are being explored, and proved reserves are increasing. Substantial new production is coming from the Niobrara Shale formation in the Denver-Julesberg Basin in northeastern Colorado. Industry estimates that approximately 2 billion barrels of oil are recoverable from the Niobrara.

Increases in U.S. crude production have contributed significantly to the rapid decline in gasoline prices. And just today, the decline accelerated. As the Wall Street Journal reported:

Gasoline futures fell to nearly a six-year low on Wednesday after U.S. government data showed oil and fuel supplies rising to a record high last week, the latest evidence of a petroleum glut that has rattled financial markets and raised questions about the strength of global economic growth.

As a parent with a daughter in college, and as a driver — one who was able to photograph this rig lit up light a Christmas tree thanks to his car — I'm very happy to save some money on gasoline. But as someone who also knows what consumption of fossil fuels is doing to Earth's climate, I'm hoping that alternatives will surge even more than the production of crude from places like Weld County.