Here's what the brutal heat wave now setting up across a large part of the U.S. looks like — in four simple graphics

I created the animation above to show how the heat wave coming to a large portion of the United States is forecast to evolve between now and Tuesday. Check out the spreading stain of deep red in the graphical forecast maps that make up the animation. The stain shows temperatures soaring under a massive heat dome forecast to build over Southern California, Arizona, other parts of the Southwest, and beyond. Not shown in the animation is the stifling heat and humidity already afflicting parts of the Southern Plains. More about that in a minute. But first... As you watch the animation, watch for the high temperatures in Phoenix and Los Angeles. Also check out how the red stain fills the meandering trace of the Grand Canyon in northern Arizona. The canyon is so deep that it is usually considerably warmer than the higher elevations on the southern and northern rims.

The coming heat wave in Los Angeles and Phoenix

Los Angeles is now forecast by the National Weather Service to top out at 103 degrees on Monday. (The animation pegs it a 101, but as I've been preparing this post, the forecast has been updated.) According to the NWS forecast discussion for the area, if the models are right:

The forecast for Phoenix isn't any better, with high temps forecast to reach 118 there on Monday. As the NWS forecast discussion for the area puts it:

The expanding high pressure system over the region will build to levels not seen in awhile, meaning record heat, especially Sunday through Wednesday. 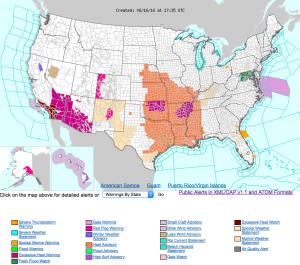 Source: National Weather Service The weather service has already issued an excessive heat warning for a broad region stretching from southeastern California, down into the California deserts, across into southern Arizona and also including Las Vegas and southern Nevada. In the national overview map at right (click to enlarge), heat warnings are indicated in purple. Also note that huge splotch of orange to the east. This region is under a weather service heat advisory. And within it, check out the purple pockets in Oklahoma and Arkansas where excessive heat is already occurring. Zooming in on Oklahoma, these heat index readings are downright scary: 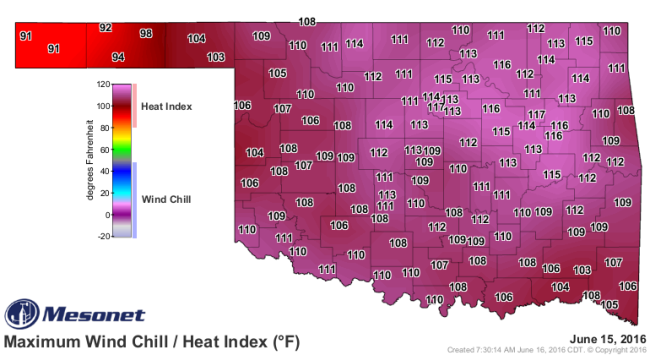 Map courtesy of Mesonet The tones of magenta show where conditions were most brutal, with numerous readings above 110 and some as high as 117. These are not actual temperatures. The heat index shows how conditions actually feel, given the combination of heat and humidity. Oklahomans: You have my very sincere sympathies! 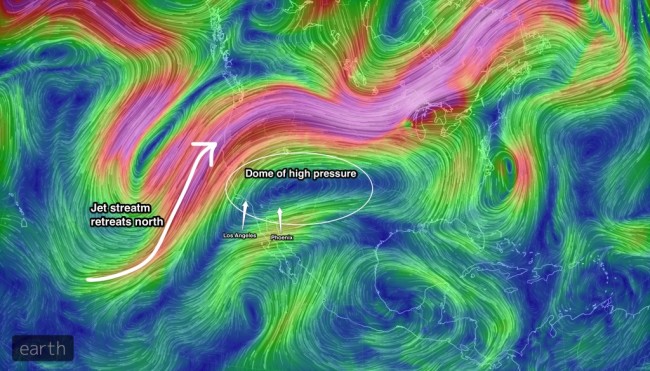 The forecast for winds at jet stream level on Monday, June 20 . (Source: earth.nullschool.net) Last but not least, the graphic above shows the meteorological set up for the heat wave. It depicts the forecast for wind flow on Monday at the level in the atmosphere where jet streams flow, roughly at 30,000 feet. (For weather geeks like me: 250 hPa height.) The jet stream is forecast to retreat north. And to the south of it, that dome of dense, high pressure air will build and spread. As it does, air will tend to sink under the high pressure, and temperatures will rise. A whole lot. For more details on the heat wave, as well as record-setting warmth at Earth's high latitudes, see this post by my friend and colleague Bob Henson, over at Weather Underground.