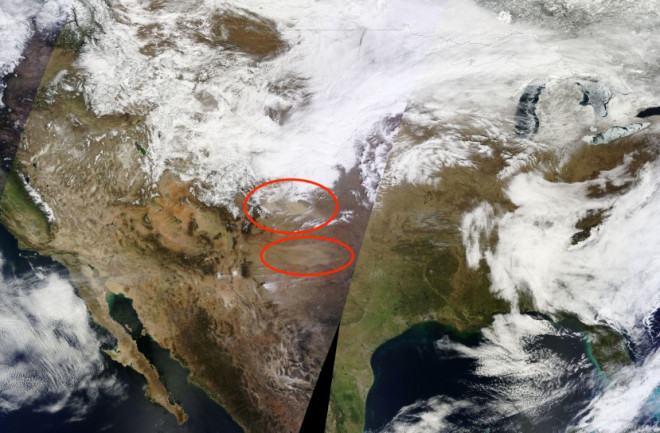 Two huge dust storms are visible in Colorado and Texas in this mosaic of satellite images captured on Tuesday, March 18, 2014 by NASA's Terra satellite. (Source: NASA) Just a week ago, I posted some imagery of an intense dust storm sweeping south through the High Plains. Well, here we go again... Today, high winds triggered two dust storms, one in Colorado stretching into Kansas and the Oklahoma Panhandle, and the other in the Texas Panhandle — the same region as last week's storm. They were so big that they are clearly visible in a mosaic of images from NASA's Terra satellite showing almost all of the United States. (See above.) Here's an animation of two close-up images of the Colorado dust storm, the first taken by Terra and the second taken later in the day by the spacecraft's sister satellite, Aqua:

An animation of two satellite images shows the spreading Colorado dust storm. (Images: NASA. Animation: Tom Yulsman) Here's what it looked like on the ground today in Holly, Colorado:

As I mentioned last week, the March 11 U.S. Drought Monitor map shows this region in the grips of severe drought. Echoes of the Dust Bowl...