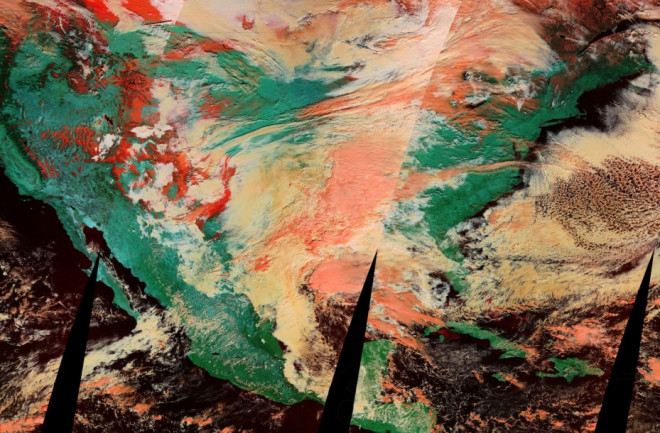 NASA's Terra Satellite captured this false color composite view of the United States on Saturday, Nov. 25, 2013. The salmon colored clouds show the storm that is now starting to move up the East Coast. (Image: NASA) By now, you've probably heard of it: Winter Storm Boreas, the beast that threatens to disrupt travel for millions of Americans on the eve of Thanksgiving. But have you seen it in this light? The image above is a false-color, composite view of the United States from NASA's Terra satellite. It was captured yesterday by the MODIS instrument and emphasizes wavelengths of light that are particularly good at highlighting snow and ice. In the image, snow is revealed by the vivid red-orange colors. But what we're interested in is the salmon coloring, which reveals the presence of small ice crystals in high-level clouds. That big splotch of salmon coloring in the South and Midwest is what was headed for the East Coast yesterday. And now it has arrived, bringing a really nasty mix of snow, sleet, rain and wind. Here's what it looks like as I'm writing this, in an animation from a GOES weather satellite: http://www.youtube.com/watch?v=TWsGOHA6C-A&feature=youtu.be About half the way through you can see the beginning of a huge blossoming of thick clouds originating from water vapor streaming off the Gulf of Mexico. In fact, the amount of water vapor contributing to the storm will reach record highs for November, according to Jeff Masters, chief meteorologist for Wunderground.com. In addition to thunderstorms and a risk of tornadoes in the Southeast, this will bring as much as five inches of rain to some parts of the Northeast:

Precipitation forecast for the next three days. (Source: NOAA) Both of my kids are scheduled to fly out of New York City early tomorrow morning to join the family for Thanksgiving here in Colorado. Like millions of Americans, I have my fingers crossed that they'll be able to complete their travel. But looking at these images, I'm not terribly hopeful!