Heading into the summer, Arctic sea ice is in bad shape

Arctic sea ice extent in April was nearly 394,000 square miles below the long-term average — an area one-and-a-half times the size of Texas. 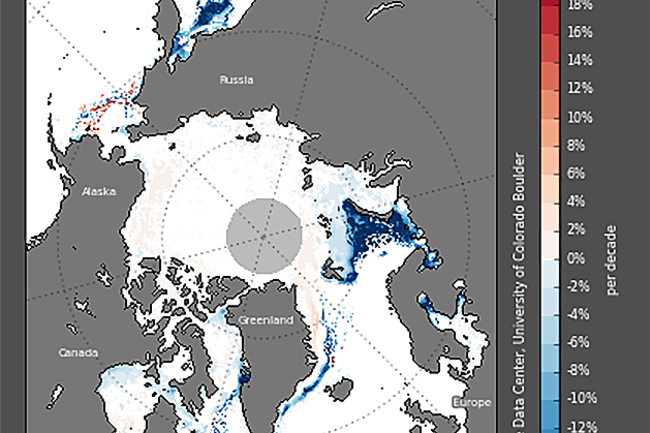 April 2017 Arctic sea ice concentration trends since 1979. The deepest blue color shows areas where sea ice has declined by more than 20 percent per decade. (Source: NSIDC) The Arctic's floating lid of sea ice continued to decline in April, tying the record set last year for lowest April extent. This makes it four straight months of record lows in 2017, leaving Arctic sea ice in a precarious state as seasonal warming accelerates with the approach of summer. 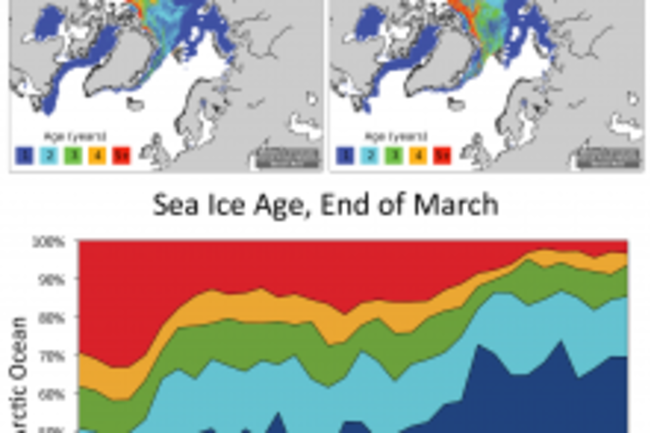 2016 (top left) and 2017 (top right) Arctic sea ice age for the end of March, and the time series of percent coverage for the Arctic Ocean (bottom). Source: NSIDC, courtesy M. Tschudi, C. Fowler, J. Maslanik, R. Stewart/University of Colorado Boulder; W. Meier/NASA Cryospheric Sciences According to the latest report from the National Snow and Ice Data Center, Arctic sea ice extent for April 2017 averaged 394,000 square miles below the 1981 to 2010 long-term average for the month. That puts it in a tie with April 2016 for the lowest April extent in the 38-year satellite record. The thickness of sea ice also is suffering under decades of human-caused warming in the Arctic. One way scientists get a handle on this factor is by keeping track of its age, since older ice generally is thicker. As the graphic at right shows, Arctic sea ice has been getting progressively younger. The oldest and thickest ice is almost completely gone now. And the region is dominated by ice that's just a year old or less. In the mid-1980s, first-year-ice made up 35 to 40 percent of the Arctic Ocean’s ice cover. Today, it's 70 percent. As the NSIDC report puts it:

At the end of March, ice age data show only a small remaining coverage of old (5+ years) ice. Since 2011, the oldest ice has comprised less than 5 percent of the total ice cover. During the mid-1980s, such ice made up nearly a third of the ice.

In April, NSIDC scientist Julienne Stroeve worked with other scientists to sample ice thickness and snow-pack characteristics in the Canadian Arctic. She and her colleagues found that "the ice was unusually broken up and reduced to rubble, with few large multi-year floes," according to the NSIDC report. Pilots working with the science team "remarked that they had never seen the ice look like this."