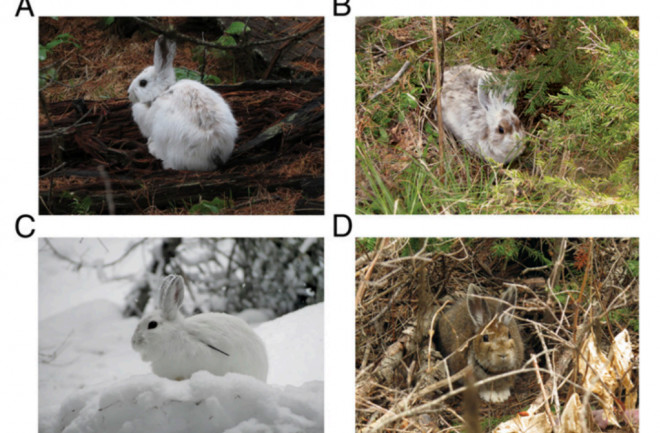 Types of contrast between seasonal coat color and snow background. Image courtesy of Mills et al./PNAS In the past few years, snowpack in the Rocky Mountains has seen both extreme highs and extreme lows. And this volatility presents a problem for more than just skiers hoping to maximize their season on the slopes. Animals like snowshoe hares change their fur color with the seasons to blend in with their surroundings---snow white in the winter and woodland brown in the warmer months. But if a hare is brown when there's snow on the ground or white when there's not, it makes him much more vulnerable to being seen. And eaten. Camouflage is particularly important because 85 and 100 percent of hare fatalities come at the hands (or paws) of predators. For hares, mismatching their surroundings quickly becomes a life and death situation. So what happens when climate change throws off the coordination of this seasonal costume change? Researchers in the Rocky Mountains tracked snowshoe hares over the course of three years, 2010-2012, recording the color of their fur and of their surroundings. The goal was to figure out when and how quickly the hares changed color to see if there was any room for flex in these transitions. What they found was that in the fall of all three years, no matter when the first snow fell, the hares would change from brown to white in about 40 days. This number didn't vary much, nor did the start and end dates. But during the spring molt, the hares showed a little more flexibility. Spring 2010 was unusually warm, and the snow melted earlier than usual. The hares responded in kind, completing their molt 16 days earlier than in the following spring, 2011, which was much colder and snowier than normal, according to the results published in Proceedings of the National Academy of Sciences yesterday. Snowpack, or the number of days with snow on the ground during a given year, is a good way for researchers to track climate change. If climate models are correct, the Rockies could see 40 to 69 fewer days of snowpack by the end of the century, which the researchers say would result in four to eight times more days on which hares would be mismatched than today. That's a pretty big threat to a species whose only real defense is blending in.The researchers say their findings also apply to at least nine other species which rely on similar methods of camouflage. Since these species will be easier to see, then, sadly, the eventual outcome could be seeing fewer of them.