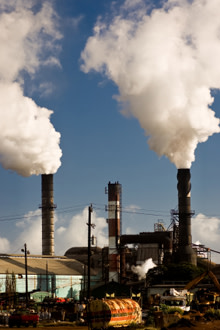 For several years now, the Environmental Protection Agency has been lurching toward enacting rules to regulate greenhouse gases under the Clean Air Act. Yesterday, the first steps of the EPA's new rules went into effect. The new regulations come in two parts, the first of which limits the emissions allowed by new cars and light trucks.

The rules apply to 2012 model vehicles, which can be sold starting Sunday. They must now follow toughened CAFE fuel efficiency standards laid out in May. With industry on board—though there's some grumbling—these steps are relatively uncontroversial. [ScienceNOW]

The second and more contentious part of EPA's action are new rules for power plants, factories, and refineries. Beginning yesterday (January 2), any new plant that will emit more than 100,000 tons of carbon dioxide (or the equivalent) annually will need an EPA permit, as will existing plants that install new capacity that emits 75,000 tons or more. The regulations for all existing plants will follow this July, when those that emit the equivalent of 100,000 annual tons will need permits to do so. These moves have inspired the standard political jockeying, with one side arguing that something must be done to bring down emissions and the other arguing that EPA rules throw a wrench into the economy. For power companies themselves, the rules seem like a mixed bag at the moment:

A number of power companies and refiners say the new rules won't stop them from expanding over the next few years. Some already have permits for upcoming projects. Others are replacing coal-fired plants with cleaner natural gas plants so they won't face global warming regulations — yet. But even more significant restrictions are on the way. Just before Christmas, the EPA announced it will set standards for how much carbon dioxide pollution power plants and refineries can release. [NPR]

Perhaps the more pressing question, however, is whether this new greenhouse gas regime will even survive the onslaught of lawsuits that seek to tear it down by questioning the EPA's authority over the states.

A dozen states have filed suit to halt the new greenhouse gas rules, with one, Texas, flatly refusing to comply with any new orders from Washington. Two federal courts, including one this week in Louisiana, have refused to issue restraining orders halting the implementation of the new rules. But late Thursday, a federal appeals court in Washington temporarily blocked the the E.P.A. from enforcing its rules in Texas while the courts consider whether the federal agency has the right to take over the Texas program. The courts have not yet ruled on the legality of the broader federal program. [The New York Times]

But opponents of emission regulations aren't the only ones filing lawsuits to push forward their agenda. The Supreme Court is slated to hear an appeal

of a case brought by states that want to go after large power companies under "public nuisance" common law to force them to cut emissions that way. Stay tuned. Related Content: DISCOVER: The 9 Industries That Will Be Most Screwed By Global Warming (PHOTOS)

80beats: Do the Election Results Halt All Action on Climate Change?