Two independent studies show how much we need to limit warming to preserve the ice. But we're currently headed on a very different path. 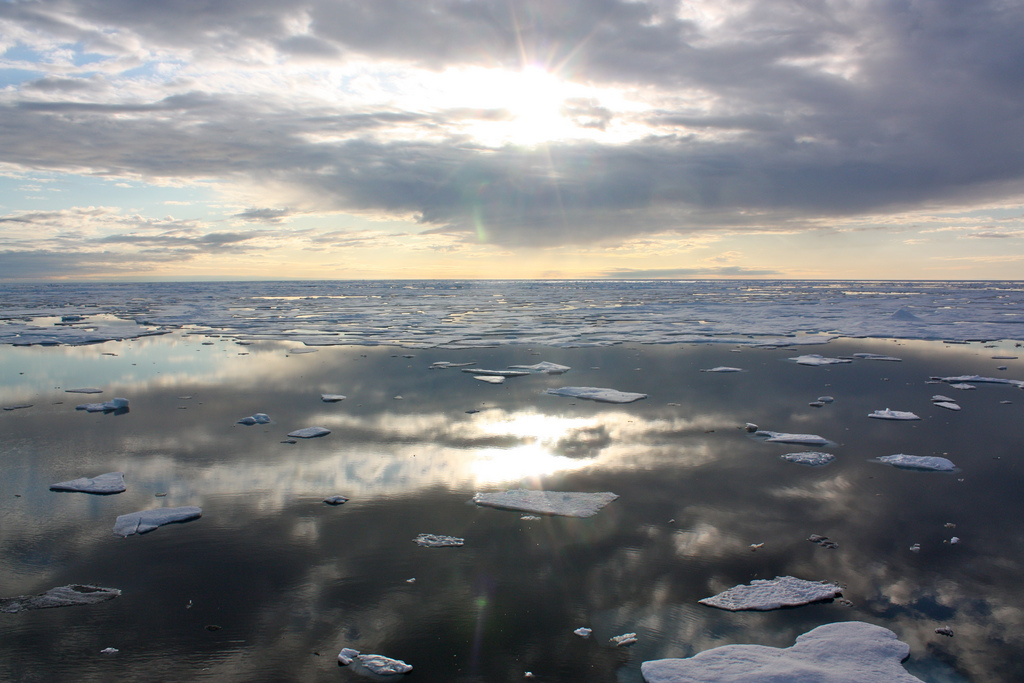 The U.S. Coast Guard Cutter Healy encountered only small patches of sea ice in the Chukchi Sea when this photograph was taken on July 20, 2011. (Courtesy NASA Goddard Space Flight Center) Almost every month now we get news of dramatic losses of Arctic sea ice due to human-caused warming — and last month was no exception. The ice extent in March 2018 turned out to be the second lowest for the month in the satellite record. The best estimates are that unless we significantly reduce our emissions of planet-warming carbon dioxide, the Arctic Ocean will begin to experience ice-free summers by mid-century, if not sooner. But just how much would it take to give the ice a fighting chance? According to a pair of independent modeling studies published in the journal Nature Climate Change, a global warming difference of just a half degree Celsius — that’s less than a degree Fahrenheit — could make all the difference. https://twitter.com/ZLabe/status/980834152697151488 Both studies examined what would happen if humankind managed to restrain global warming by the end of the century to no more than 1.5 degrees C (2.7 degrees Fahrenheit), versus 2 degrees C (3.6 degrees Fahrenheit). Those different levels of warming are significant because of the Paris Climate agreement. It commits the 175 signing parties to exerting their best efforts at keeping global warming this century below 2 degrees C above preindustrial levels. The agreement also states that it would be much preferable to limit warming no more than 1.5 C. The two new studies show for the first time just how beneficial achieving the lower number would be for the Arctic, out to the year 2100. As University of Colorado climate scientist Alexandra Jahn, the author of one of the studies, put it to me in an interview, "There’s a strongly reduced probability of experiencing ice-free summers if warming can actually be limited to one and a half degrees instead of two.” The other study, conducted independently by Canadian researchers, produced the same overarching insight. “We arrive at very much the same conclusions,” Jahn said. “This tells us that we can trust results.” If you're wondering why we should care about the Arctic, the answer involves more than polar bears, Arctic ecosystems, fisheries, undiscovered resources, and geopolitics. What happens in the Arctic doesn't stay in the Arctic. 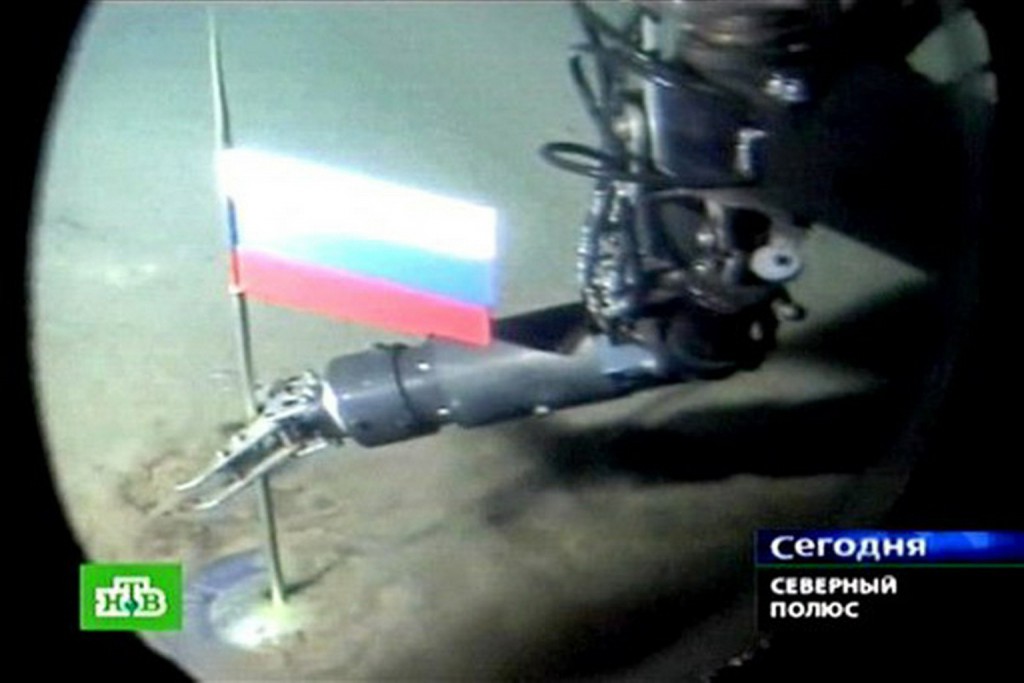 In 2007, Russia used a pair of submersible vessels to plant the nation's flag on the seabed at the North Pole. It was a symbolic gesture in support of Russia's disputed claim to nearly half of the Arctic Ocean seafloor — and potential oil and gas resources there. (Photo: Still from NTV Russian State Television) "Everything that happens in the climate system is connected," Jahn said. Although the details are still being investigated, warming in the Arctic and losses of sea ice appear to have impacts on mid-latitude weather. Moreover, losing the sea ice in summer is likely to "further accelerate global warming in general." In Jahn's study, simulations run on the Community Earth System Model, or CESM, showed that global warming of about 2 degrees C would guarantee ice-free conditions in summer by the year 2100. Moreover, "frequent ice-free conditions can be expected, potentially for several months per year," she writes in her paper. By contrast, if we were to limit our emissions of CO2 enough to constrain warming to no more than 1.5 °C, the probability of ice free conditions occurring by 2100 would drop to just 30 percent. Jahn did not expect that big of a benefit."I was surprised by that," she said in our interview. Why would such a relatively modest change make such a big difference? When I put that question to Jahn she pointed out that "nobody exists in the global mean climate." Some areas of the world are heating up more quickly than the global average — and none more so than the Arctic. 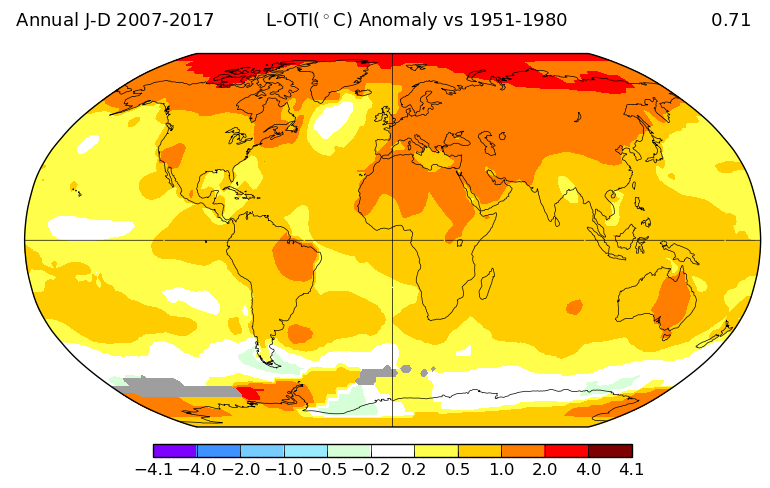 This map shows how temperatures varied from the long-term mean for the 10 years spanning 2000 through 2017. The red and orange tones in the far north show that the Arctic has been warming more than any other major region. (Source: NASA GISTEMP) As we get further into the 21st century, that phenomenon is expected to continue, and perhaps even intensify. "Based on the model I am working with, the CESM, it seems that Arctic change is about three times as much as the global average," Jahn said. Emphasis on the word 'about.' According to her CESM modeling, here's how the numbers work out a bit more precisely (with all temperatures given in Celsius): 1.5 degrees of global warming translates to 4.25 in the Arctic. And 2 degrees C globally means 6 degrees of warming in the Arctic. That's why a seemingly small difference can help save the ice. But that doesn't mean Arctic sea ice will stop shrinking. "Even when warming is limited to 1.5 °C, the Arctic summer sea-ice cover experiences significant reductions compared to today's cover," Jahn writes in her paper. Also, keep in mind that this is all about probabilities. So it's still possible that we'd see an ice-free summer — even as early as mid-century — with no more than 1.5 degrees C of warming. It's just not a likely outcome. Jahn’s simulations show that this would be the result of natural variation combining with the effects of human-caused warming to drive sea ice that low. But if this should happen despite the low odds "it is likely to be an isolated event, whereas in the stronger-warming scenarios a second ice-free year would soon follow the first," Jahn writes. One stronger-warming scenario run by Jahn on the computer model is known as "RCP8.5." You can think of it as business as usual. With it, the concentration of carbon dioxide in the atmosphere would continue to rise steeply, and by the end of the century it would soar to above 1,000 parts per million. We're at about 410 ppm now. With RCP8.5, mean global warming would exceed 4 degrees C above preindustrial levels by 2100. If Jahn's computer simulations are accurate, that would produce a truly huge increase for the Arctic — close to 12 degrees C. And the impact on sea ice would be stark. With this scenario, "the ice-free season in the Arctic could extend from July to November in some years, with a 100% probability of ice-free conditions from August to November by the final decade of the twenty-first century," Jahn writes. For the second study, Canadian researchers used a different climate model and approach. Yet here too, the simulations show substantial benefits for stabilizing global warming at the end of the century at 1.5 degrees C versus 2: "an eightfold decrease in the frequency of ice-free conditions is expected, from once in every five to once in every forty years," the scientists write. Both studies give us something to shoot for. But we are currently headed on a different path, with CO2 concentrations still growing, and the rate of growth increasing. If the signatory nations to the Paris Agreement really do live up to their commitments to cut greenhouse gas emissions, we'll get onto a better path. But even so, those emission cuts would not be sufficient to limit warming to 2 degrees C, let alone 1.5. Instead, the globe overall would probably experience warming of about 3 degrees C by 2100. With that amount of warming, the Canadian study shows that "permanent summer ice-free conditions are likely, which emphasizes the need for nations to increase their commitments to the Paris Agreement." How likely are we to limit global warming enough to save the Arctic sea ice? I posed that question to Mark Serreze, director of the National Snow and Ice Data Center. The NSIDC crunches the satellite-monitoring data every month to provide regular updates on what's happening to the ice. "If we got a handle on fossil fuel emissions, we could keep global warming from getting out of hand," he wrote in an email message. But he's not optimistic. "I think we are destined for a seasonally ice free Arctic Ocean. I don't see that this is stoppable given our dependence on fossil fuels. We'll need to adapt. And we will." But now that we know how much of a benefit could be gained by shooting just a little lower than 2 degrees C, perhaps we can summon up the will to do more than simply adapting and instead get more serious on mitigating the CO2 pollution that we're pouring into the atmosphere.