Had enough meteorological mayhem? Sorry, thanks to El Niño, things are likely to get even worse 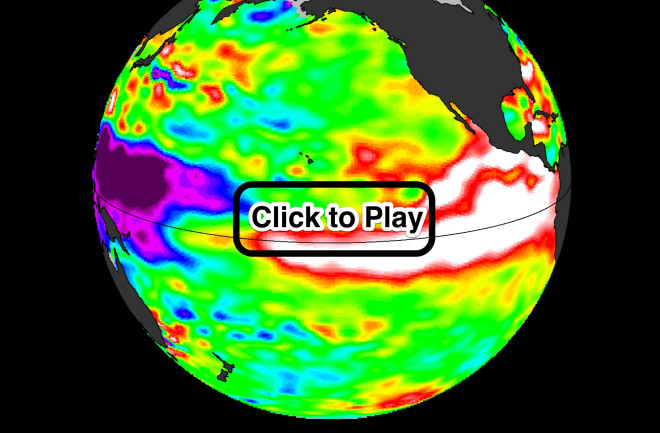 The evolution of El Niño from the start of 2015 through Dec. 27 is seen in this animation using data from the Jason-2 satellite. The satellite measures the height of the sea surface. Expansion from warming raises sea level, and visa versa. In the image above, the warmest waters are depicted in white, the coolest in deep purple. The long tongue of warm water that develops along the equator is a hallmark of El Niño. (Source: NASA Jet Propulsion Laboratory) From preternatural Christmas warmth enveloping the eastern U.S., to deadly tornados raking the nation's midsection, to historic flooding that followed close behind, and most recently to a monstrous storm that unfroze the Arctic, the past several weeks have brought a pronounced bout of meteorological mayhem.

SEE ALSO: One of the most powerful N. Atlantic storms on record builds 55-ft waves and brings winter melting to North Pole

And that list doesn't include the impacts that many millions of people in poor parts of the world have been experiencing. As my friend and colleague at the BBC, Matt McGrath, reports:

Millions more have been experiencing drought and crop failure in places like Ethiopia, Haiti and Papua New Guinea. Much of what we've been seeing recently — but definitely not all of it — can be attributed in part to the powerful influence of the Godzilla in the room, El Niño. "El Niño impacts across many continents have been powerful for many months," says William Patzert, a research scientist with NASA's Jet Propulsion Laboratory. "From South America to Africa to the Western Pacific, El Niño has delivered huge impacts." Back in April, Patzert said this one had "the potential of being the Godzilla El Niño.” Looks like he was right. Unfortunately, things are almost certainly going to get worse. Perhaps much worse — although for California, the intense bouts of precipitation that are likely to bring landslides in coming months should also help alleviate the drought that has sucked the state's reservoirs almost dry. To get a sense of El Niño's possible connections to the recent meteorological mayhem, and what we probably have in store, I emailed some questions to Patzert. What follows are selections from his responses, interspersed with explanations and relevant graphics. Let's start with the historic flooding now underway in the United States:

Flooding of the Meramec River near the intersection of I-44 and Route 141 west of St. Louis. (Photo: ©Kelsey Ray) The photo above was taken by Kelsey Ray, a graduate student in the environmental journalism program I direct at the University of Colorado. The floodwaters are from the Meramec River in Missouri, which over the past four days has risen 35 feet or more, thanks to record rains last weekend. Here's another view:

Are we looking at El Niño? The answer is not quite clear-cut, according to Patzert:

Here in the U.S., the canonical, or typical, pattern has not kicked in. Yet chaotic weather behavior in the Midwest and Southeast has been influenced by an active subtropical jet stream that is surely El Niño driven.

That comment prompted me to take a look at how the Pacific subtropical jet stream looks right now, and how it is forecast to evolve over the next two weeks. (For a primer on the rivers of fast moving air that we call "jet streams," go here.)

Below is what the GFS weather model shows. First have a look at the screenshot, which I've labeled to help you get your bearings. Then click on it to watch the animation, paying close attention to the area I've indicated in red.

The active, extended subtropical jet stream evident across the Pacific is a hallmark of El Niño. It helps to deliver storms to California and across the southern tier of the United States.

What of the tornadoes that raked a broad section of the U.S. midsection, from Texas to Mississippi and, incredibly, up to Michigan?

Here's how Bob Henson and Jeff Masters of Weather Underground described the outbreak:

The widespread persistence of warm, humid conditions over the last few days has led to an unusual U.S. stretch of severe weather for December, including tornadoes from Mississippi to Michigan on Wednesday. The EF1 tornado that touched down in Canton, Michigan on December 23 was Michigan's first December tornado on record. If tornadoes are confirmed on Monday, it will be the sixth calendar day in a row with at least one U.S. tornado reported, tying a monthly record set on December 22-27, 1982, during the “super El Niño” of 1982-83.

Is it a coincidence that the current tornadic outbreak looks similar to what happened in a previous super El Niño episode? Bill Patzert doesn't think so:

Remember, El Niño Decembers have a history of tornado chaos. Is this El Niño? History says yes! Moist, unstable air colliding with deep troughs in November and December is El Niño's history . . . Having said all that, the exact footprint of El Niño is difficult to pinpoint.

Not all of the recent meteorological mayhem has been vicious in nature. Moving to the West, a series of storms has had more of a beneficial effect. I created the following animation of satellite images to illustrate that point:

Satellite images captured by NASA's Terra satellite show just how much snowpack in the Sierra Nevada Range of California has improved since last year. (Source: NASA Worldview) The first image in the animation shows California and much of the Western portion of the United States on Dec. 27, 2014. The second was acquired on Dec. 28 of this year. The Sierra Nevada range, from which California derives a good portion of its water by way of snowmelt, runs diagonally across the middle. Actual snowpack data validates what you can see in the animation: At the end of 2014, Sierra snowpack was at just 50 percent of average for that time of year. As of Dec. 30 of this year, it stood at 105 percent of average. (For the latest data on Sierra snowpack, go here

.) That's certainly good news. But it's hasn't come primarily as a result of El Niño — not yet. California's drought was greatly exacerbated by a huge and persistent pool of very warm surface waters, dubbed "the blob," off the coast of North America. This helped reinforce a stubborn ridge of high pressure that kept diverting storms away from California. But now, the blob is all but dead

. And that's allowing the normal cool-season parade of Pacific storms to blanket Western mountains. As Patzert puts it:

In the West, the polar jet stream has overpowered the infamous 'Blob,' and the Northwest, much of the West and the Northern Sierras, are getting much needed snowpack and hope for drought relief. These are not your typical El Niño storms.

But that situation is about to change:

As we move into January, February and March, I expect the subtropical jet to move into the expected zonal pattern and deliver the much discussed drenching across the southern tier of the U.S.

That drenching, falling as snow in the mountains, is desperately needed in California, still suffering from exceptional drought. (Click on the thumbnail at right to see the current drought situation in the state.) Of course, we're talking about weather here, and that means there are no guarantees. Only odds. But Bill Patzert is ready to place his bets:

That the U.S., and especially the American West, will have a benign and quiet winter would be an unbelievably long shot. This episode is huge – in size and intensity. My call: The U.S. is in for a wild ride in January, February and March, and perhaps into April and May. I ain't alone in this forecast. If we are wrong, there will be plenty of climate degrees revoked. Me? I'll go into a witness protection program, and you will be able to reach me with 'a note in a bottle' in Tahiti or some other remote South Pacific Island.

I'm betting that the note-in-a-bottle method will not be necessary.