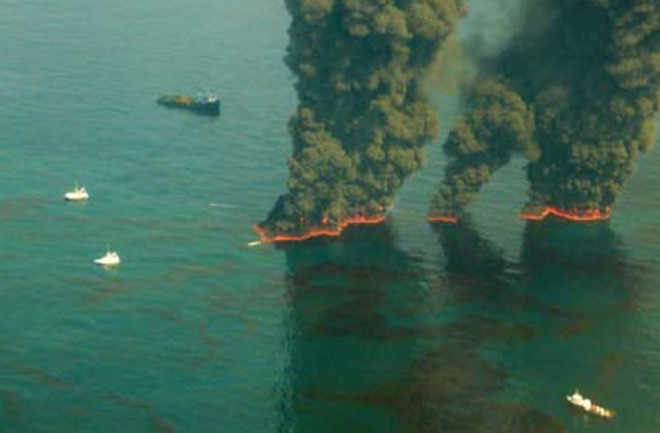 Will the Florida Keys catch a break with the loop current? Most observers are now in agreement that one of the biggest ecological worries about the BP oil spill—that it could reach the Gulf of Mexico's loop current that flows to the Keys—has begun to occur. However, The New York Times reports today via Greenwire that eddies around the edge of the current are keeping much of the oil out of it. Clear predictions are hard to come by because the oil continues to defy expectations about which direction it will go, and so does the loop current.

The loop moves based on shifting winds and other environmental factors, so even though oil is leaking continuously it may be in the current one day, and out the next. The slick itself has defied scientists' efforts to track it and predict its path. Instead, it has repeatedly advanced and retreated, an ominous, shape-shifting mass in the Gulf, with vast underwater lobes extending outward [AP].

And, oceanographers like Mitch Roffer say, eddies forming near the current could disrupt it and change the oil's course.

Satellite shots this morning showed that an eddy farther south along the Florida coast is expanding in size and strength. That cyclone appears likely to destabilize or even sever the Loop Current, greatly reducing the oil threat to the Florida Keys and beyond, he said. "If it forms, it's going to pull a lot of the oil away from Florida," Roffer said. There are no guarantees, he added, "but it looks very likely that this is forming" [The New York Times].

While this development—if it holds—would benefit the Keys and the areas beyond, there's still a great mass of oil dumping into the Gulf. BP said today that the siphon it successfully installed on the leak is now carrying 5,000 barrels of oil per day up to a tanker on the shore. Since lots of oil is still leaking, that's a de facto admission that the original estimate of the spill—5,000 barrels a day—was much too low. You can now watch the live video feed

of the oil online. Another lingering fear about the spill is coming to pass as well. Oil is beginning to show up in force on the Louisiana coastline, according to Governor Bobby Jindal.

"This is serious — this is the heavy oil that everyone has been fearing. It is here now," Jindal said Wednesday as he toured the Mississippi Delta by boat and swept a fishnet through water, holding up dark, dripping glop. The region is home to rare birds, mammals and a wide variety of marine life. "This is one of the oldest wildlife management areas here in Louisiana, and now it is covered in oil," Jindal said [NPR].